Luxury BMW M760Li xDrive flagship is the brand’s fastest ever car, but does it feel it?

The M badge sits well on the big 7 Series, turning it into a fast, fun saloon but without harming the car’s luxury credentials. Its handling abilities will surprise you given the sheer weight of the package, although the V12 engine’s gentlemanly approach to performance is slightly at odds with the ‘fastest ever BMW’ tag – it just doesn’t feel it. It’s still a luxury car, however, and a fitting flagship.

Never one to miss an anniversary, BMW celebrates 30 years of V12 engines in its range-topping 7 Series this year – it was back in 1987 that the V12-powered 750i was born. A little tenuous, perhaps, but it does give the brand a neat link to this, its latest flagship, the extensively named M760Li xDrive.

Let’s talk through that nomenclature: M because this model is born from the new M Performance line-up; 760 because, well, there’s a 6.6-litre V12 engine under the bonnet (we don’t get that bit, either); L for long-wheelbase configuration; i for a petrol model and xDrive denotes four-wheel drive. 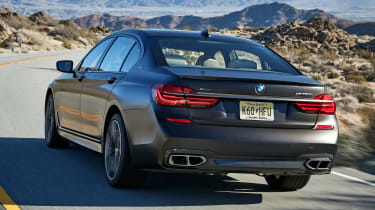 Of all those numbers and letters, it’s the M badge that is most important. Especially because of the work BMW’s M team has done on the engine. It’s a beast, producing 602bhp and 800Nm of torque – enabling this car to get from 0-60mph in 3.6 seconds. That, officially, makes it the fastest production BMW ever made. Yes, in a long-wheelbase luxury saloon that’s 5,238mm long and weighs 2.2 tonnes.

The guys and girls at M have also been hard at work on the dynamics, giving the four-wheel-drive system a rear-drive bias, tweaking the aerodynamics and tuning the sound from the V12. There’s also the latest Executive Drive Pro Suspension with active roll stabilisation to adjust the feel of the car according to the conditions and your mood, plus all the safety, connectivity and infotainment kit you’d expect from a flagship – as well as a few more tasty treats on the options list. 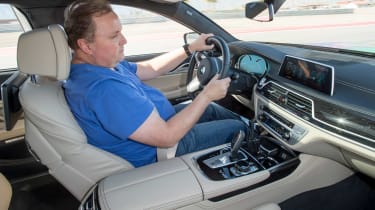 But can a car this big and this fast cut it around corners, too? In a brave move, BMW took us to a circuit to try to convince us. There’s no denying the laws of physics and, in spite of the use of carbon fibre in the body, this is still a big, heavy car that’ll lean a touch through corners and with a natural tendency to understeer in tighter bends.

However, using clever electronics and a touch of rear-wheel steering (boosted if you select sport mode – and you should), the M760Li xDrive will surprise you with a degree of agility lacking in other big, fast, luxury cars (Mercedes-AMG’s S-Class models, for example). It’s not an M3, 4, 5 or 6, but it’s still a fun car with enough grip to inspire confidence, even on the slippery mountain roads when we got away from the test track.

Through the slalom course laid out for us at the circuit, though, the car weaved in and out of cones seamlessly with steering that’s accurate if not reacting especially fast to inputs. This is a car that will flow nicely from bend to bend, rewarding a smooth driving style rather than an attacking one.

The engine, though, doesn’t really have the punch the title of ‘fastest ever BMW’ suggests. You need to have the car in Sport mode for better throttle response (it’s a little languid in Comfort), but there’s never really the punch that you might expect – it’s more like an aircraft on take-off than that first kick in the kidneys of a rollercoaster.

That’s not to say it isn’t fast – it is – but there’s a slight lack of drama and excitement, including the sound, while the gearbox is a little hesitant when you kick down, too. The slightly cheaper Mercedes-AMG S 63L might not match the BMW’s performance on paper, but it actually feels faster in a straight line and sounds a whole lot more thrilling. The Mercedes doesn’t hide its weight quite as well, though, with the BMW feeling more agile than these cars have a right to. 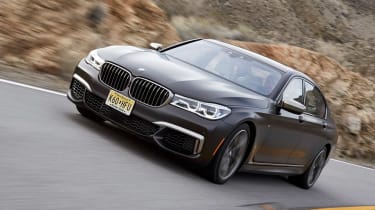 Away from the track – and let’s be honest, we doubt any owners will use their M760Li xDrives as track day specials – the car plays its luxury hand well. On a cruise you’ll enjoy an impressive level of refinement and a plush ride.

However, there is an M badge on this car and the interior doesn’t do a lot to remind you of that. Yes, it’s a thing of beauty and quality that’s more than a match for anything else, but it’s similar to any other 7 Series. We’d have liked a few sportier M-style flourishes inside, at least as no-cost options.

The exterior is a bit more exciting, though. The 7 is already a great looking luxury car – and you can have it in two flavours: M with a tastefully sporting bent and special 20-inch alloys or Excellence with more chrome and luxury exterior trim that’s aimed mainly at the lucrative Chinese market.