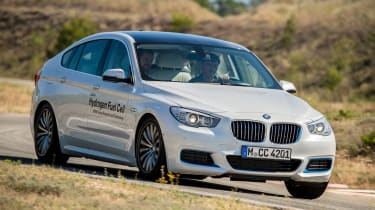 BMW was looking into fuel cell technology more than 30 years ago and it has had some success in the field with the Hydrogen 7 and H2R models of the 2000s. So if anyone can make this marriage of two futuristic technologies work, it can – and, with some refinements, we can easily see this BMW 5 Series GT FCEV drivetrain making its parent company’s dream of a “technologically mature, customer-ready vehicle for 2020” come true.

The BMW 5 Series GT Fuel Cell Electric Vehicle is a very early BMW research and development prototype fuel cell electric vehicle (FCEV). Born out of the German firm’s collaboration with Toyota, it’s an attempt to kill off two of the spectres hanging around current hybrids in one fell swoop; namely, range anxiety and truly zero-emissions running at all times.

BMW’s fledgling technology has been installed into the chassis of a 5 Series Gran Turismo model. The drivetrain uses a 200- to 400-cell stack hydrogen array in place of the engine at the front. The fuel tank and its housing is a large, cylindrical device that sits longitudinally in the 5 GT’s chassis in place of the prop shaft. This tank can hold either 4.5kg of hydrogen fuel, supplied at 700bar, for an approximate range of 280 miles, or 7.1kg of cryo-compressed gas, supplied at 350bar, so that the 5 GT can travel around 437 miles. 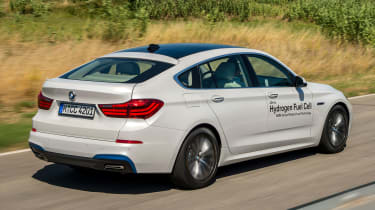 The electric motor and its two-stage reduction gear transmission are housed in the rear axle. Essentially, it’s best to think of the hydrogen fuel cell as a ‘range extender’ for a battery-electric vehicle (BEV).

BMW was at pains to point out the car’s R&D status and that a production version is two product cycles away, but even so, the signs are promising. Aside from a loud whooshing noise as the compressor underneath forced air into the fuel cell, the car was as quiet and torquey as you’d expect of an electric vehicle rated at 242bhp.

Acceleration up to 60mph felt rapid and the 5 GT generally handled like a conventional vehicle, although at this juncture brake feel obviously required work. BMW says the hydrogen system weighs 160kg and thus brings with it a 100kg weight penalty over a conventional combustion engine model, although the passenger compartment was hardly any different from a normal 5 GT's. 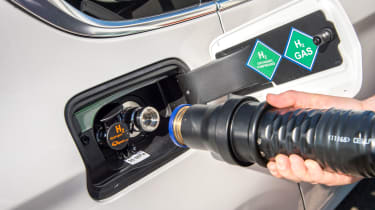 The benefits are that the FCEV can run in zero emissions mode all the time, rather than for short periods as with a plug-in hybrid. Refuelling currently takes less than five minutes but BMW assured us that soon, fuelling will be as quick as in a contemporary petrol or diesel car. The crucial factor in FCEV success is infrastructure – hydrogen filling station targets for various key countries/regions include California aiming for 100 by 2020, Germany having 400 by 2023, Japan having 800 by 2025 and South Korea bringing 500 on line by 2030.