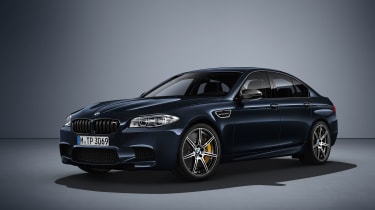 BMW has once again upped the ante with its M5 saloon, as the manufacturer has released a new Competition Edition. It gets 592bhp and 700Nm of torque, and will be one of the most exclusive M5s on the road with only 200 to be built worldwide.

Only a handful of Competition Editions will be coming to the UK. That 592bhp figure is 40bhp up on the standard M5 and 25bhp up on the previous M5 Competition Pack. It’s also exactly the same as the M5 30 Jahre edition, thanks to an increase in boost pressure and some ECU remapping. 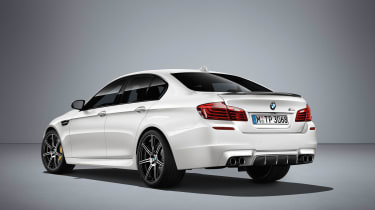 The extra power makes the executive super-saloon capable of an even more lively 0-62mph time of 3.9 seconds – matching the four-wheel drive Audi RS6 Avant. The top speed remains limited to 155mph and it still manages 28.5mpg on the combined cycle test if you spare all those horses.

Half of the M5 Competition Editions will be finished in Carbon Black, while the other 100 receive a Mineral White hue. Other exterior tweaks include 20-inch polished black alloys, gloss black grille detailing, Competition badging and an M-Performance bodykit. Inside, you’ll find special embroidered black Merino leather with white stitching, carbon dash trim and a special plaque signifying which of the 200 cars you own.

The Competition Edition also gets a heap of extra kit thrown in, including a Bang and Olufsen sound system, LED headlights, a head-up display, and BMW’s Driving Assistant system. Electric sunblinds and an electric tailgate complete the additions. 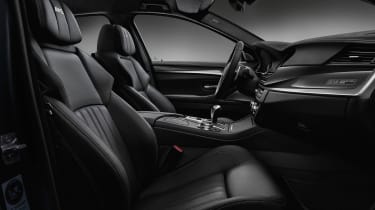 This isn’t just about straight-line performance, however, as BMW is claiming the Competition Edition is its sharpest handling M5 yet. The cars have been lowered by 10mm, while stiffened springs and dampers. plus thicker anti-roll bars, are drafted in to improve agility. The steering and M-specific Dynamic Stability Control mode has also been revised for improved track ability.

Of course, the revisions and exclusivity doesn’t come cheap. It's priced fat 129,000 Euros in Germany, and that's expected to translate to roughly £101,000 over here. Chances are, though, that they’ll all sell out pretty quickly.

Read the full review of the BMW M5 here...