BMW's M8 Gran Coupe Concept previews a future hot 8 Series, and it's been revealed at Geneva 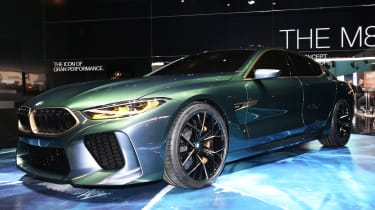 BMW’s high-performance M8 four-door Gran Coupe was the marque’s show stopper at this year’s Geneva Motor Show. With the 8 Series derivative set to take on everything from the new four-door Mercedes-AMG GT to the Porsche Panamera.

The M8 Gran Coupe Concept is said to be a close preview of an M8 production car that BMW will reveal before the end of 2019. BMW also confirmed that the car it foreshadows will be the range-topping variant of the reborn 8 Series. Meaning there will also be a ‘standard’ 8 Series Gran Coupe offering as well.

However, the concept takes the vision of the car to extremes, with looks that Domagoj Dukec, vice-president for design at BMW M, describes as “designed to stir things up, to polarise and take luxury out of its comfort zone”. 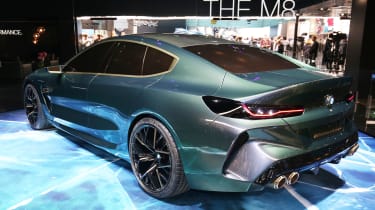 The front end of the M8 Gran Coupe is clearly related to the recently revealed 8 Series, but it’s more aggressive and features neat styling cues, such as a double-kidney grille (with gold surround) that widens towards its bottom to emphasise the lower centre of gravity.

The profile of the car is classic four-door coupe, with long overhangs at the front and rear to help ‘stretch’ out the profile. The roof is made from carbon fibre-reinforced plastic (CFRP) – the same lightweight material used for the panels on BMW’s i3 and i8 eco-vehicles – in a bid to get even more of the Gran Coupe’s mass as low as possible.

Perhaps the most complex aspect of the model’s design is the rear, which incorporates pronounced shoulders over the back tyres that then swell around the bottom edge of the rear glass to become a lip spoiler.

Regular 8 Series Gran Coupes should include most of these elements, although they’re unlikely to feature the M8’s deep air intakes at the front and its complex rear bumper and diffuser. 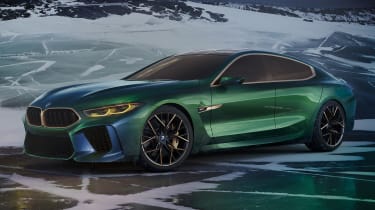 BMW hasn’t issued any technical details for the concept car, but the production M8 Gran Coupe is expected to share much of its underpinnings with the recently launched M5. That will mean four-wheel drive, an eight-speed auto gearbox and a twin-turbocharged 4.4-litre V8 engine. It’ll have 592bhp if BMW chooses to match the M5’s power figure, but given the M8 Gran Coupe’s positioning at the peak of the range, it’s conceivable that the firm may nudge the output above 600bhp.

The production version of the M8 Gran Coupe concept should sneak into UK dealerships in the second half of 2019. BMW is aiming high with this model as an alternate range flagship, and prices are likely to reflect this; they’re likely to be comfortably into six figures, and perhaps even as high as £120,000.

Welcome to our Geneva Motor Show hub page, scroll down for all our Geneva content...
BMW develops new road-sensing tech to optimise performance