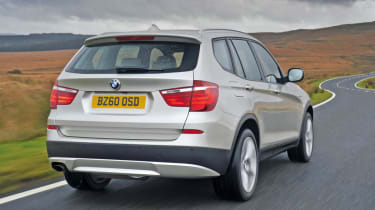 The X3 has matured from a somewhat flawed product into a genuine contender in the premium compact SUV market – and it now feels like the baby brother the X5 always deserved. With the X1 sitting below it, the model is an integrated part of BMW’s three-strong X-badged range of off-road models. It oozes class, and performed impressively both on and off the tarmac during our time behind the wheel. Come next summer, and Auto Express’s New Car Awards 2011, we fully expect the latest X3 to be challenging for honours in this competitive sector.

Bigger, lighter, better equipped – and cheaper, too! On paper, the all-new BMW X3 seems to tick every important box, certainly compared to its predecessor.
We’ve already sampled a left-hand-drive model on the smooth highways of South Carolina, US – where the X3 is built – and we were very impressed. Now, it’s time to try the right-hand-drive version destined for the UK.
Video: watch CarBuyer's video review of the BMW X3
[[{"type":"media","view_mode":"content_narrow","fid":"68618","attributes":{"alt":"","class":"media-image"}}]]
The original X3, launched in 2004, wasn’t a handsome car. More jacked-up estate than true SUV, it was a clumsy fit in the range – and customers looking for a baby brother to the ultra-successful X5 were disappointed by the firm ride and high price compared with rivals.

The new model is far more mainstream, replacing edgy lines with the sculpted finish seen on the smaller X1 and latest X5. It’s longer than its predecessor by 83mm – and is wider and taller, too – and is only 19mm shorter than the original X5.
There are few surprises in the cabin; it’s BMW’s standard palette of conservative interior shades, with black trim and brushed aluminium detailing. The only bright point is the leather trim, now standard fit and available in a variety of contrasting colours. Build quality is excellent and there’s little to fault. New to the X3 is the iDrive control knob, fitted on the centre console.
Behind the wheel, the car is comfortable and roomy, while there’s plenty of practical storage spaces and the rear seats fold flat in a 60/40 ratio. A 40/20/40 set-up is optional. Overall, there is more leg and elbow room in the back than in the outgoing model.
Boot volume has also been improved, to a class-leading 550 litres with the seats up and 1,600 with them folded down. The X3’s Audi Q5 rival provides 540 and 1,560 litres respectively.
Initially, buyers will only be able to get a 184bhp 2.0-litre diesel with permanent 4WD, in SE trim. Other units will follow next year, but there’s no petrol car as so few were sold in the past. With the standard six-speed manual, the X3 returns 50.4mpg and emits 149g/km of CO2. The Q5 offers 45.6mpg and 160g/km-plus.
Dynamically, the newcomer is typical BMW, with solid and refined handling. It soaks up the bumps in the road, even without the new optional Variable Damper Control system. The steering is accurate and well weighted, and even in the tightest corners, there’s little evidence of body roll. Our only criticism is that the pedals are slightly offset to the right on manual versions.
Prices start at £30,490 – that’s £115 cheaper than the outgoing X3, despite the improved spec. There are no plans to offer a 2WD version at the moment, although this hasn’t been ruled out.