The BMW X4 puts polarising looks and sharp handling far higher up its priority list than practicality, so if you’re after a spacious family SUV, look to the X3 instead – though the X4 does at least have five seats.

The shape of the roof seriously impedes rear visibility for the driver, so manoeuvring this sizeable SUV in tight spaces can be tricky, although there is a £330 reversing camera or a £530 surround-view camera on the options list to help out. 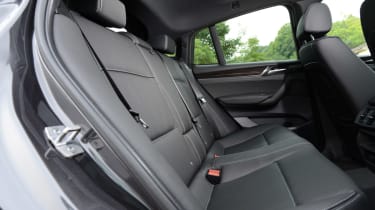 The BMW X4 is 4,671mm long, 1,881mm wide and 1,624mm tall, which makes it longer than a Range Rover Evoque but also slimmer and lower. It’s a similar story for most of the X4’s rivals, as BMW has gone for a lower, sportier stance with the X4 than you’d expect from an average SUV. Consequently, the ride height is also lower, which makes it less appropriate for off-roading than a typical 4x4.

It goes without saying that there are more spacious and practical mid-size SUVs than the X4 – the X3 on which it’s based being as good an example as any – but there is a reasonable amount of space for those in the back. The X4’s sloping roof doesn’t affect rear headroom too much unless you’re attempting to accommodate an adult on the slightly raised central rear seat. 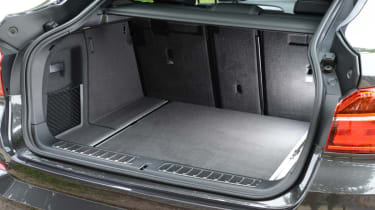 It’s all a result of that sharply raked rear window and high loading lip, which makes the space less useful than more conventional SUVs. It’s easy enough to find family hatchbacks with bigger boots, too.

To its credit, the X4’s powerful diesel engines allow it to pull large loads. The 2.0-litre diesel engine can tow up to 2,000kgs, while the larger 3.0-litre models can handle 2,400kgs.