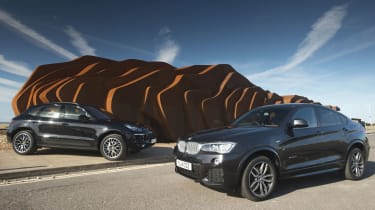 BMW likes its niches: the 3 Series compact executive range has expanded to include a variety of bodystyles, and the company has even added the 4 Series badge to cover two-door versions. Now it’s the turn of the X3 SUV to get a range expansion with the launch of the X4.

The new SUV stands out with its coupe-like roof, while its sports suspension promises a more focused driving experience than the sensible X3. Plus, it has permanent four-wheel drive. The new body and sharper drive bring a significant premium over the standard compact SUV, although BMW has also thrown in a bit more kit as standard.

For the X4’s first road test, we’ve lined up the 3.0-litre diesel model in sporty M Sport trim, while the rival we’ve chosen will be able to test the new car’s sporting credentials to the max. The Porsche Macan is one of the best SUVs in the business, and we were so impressed with it on its test debut that we awarded it the Best Compact SUV accolade at our 2014 New Car Awards ceremony.

Can the X4 prove itself against such a worthy machine? Or is it a case of style over substance?

Click the links above to read full, in-depth reviews of the cars, and scroll down to see which came out on top in this test...

In profile, the rear ends of the X4 and Macan follow a similar shape, although the Porsche is more rounded than the high-set BMW. 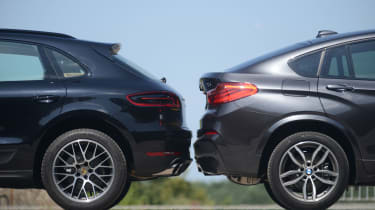 The X4 looks a little slab-sided, despite featuring sculpted lines along its flanks, and it looks bigger than its rival, too. But these two are pretty much identical in terms of dimensions, with the same roof heights and similar length and wheelbase measurements.

These cars have identical 500-litre boot capacities. The Macan has a squarer floor and wider opening, but the boot lip is slightly higher off the ground than the X4’s. Both cars feature 40:20:40 split back seats, but when folded, neither has a completely flat floor. The Macan’s 1,500-litre maximum is 100 litres ahead of the X4’s. 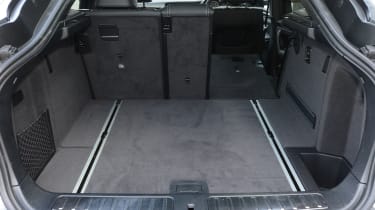 Neither of these cars is cheap to run, but the BMW promises better fuel economy and more affordable servicing. The Macan has lower company car tax costs, while road tax costs are identical, at £180 a year. Porsche’s strong residual rating means it’ll be worth more if you sell it after three years. 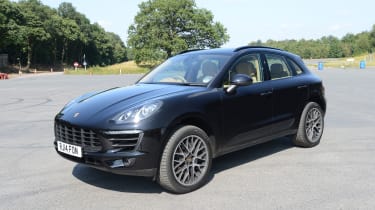 The Porsche Macan is without doubt the best luxury compact SUV on sale today. It blends stunning performance, superb handling, premium quality and everyday usability in a package that’s hard to beat. The Diesel S has all the performance you’ll need and delivers reasonably good economy, while the residual values are outstanding. Go easy on the options, and it’s also reasonably priced in the first place. 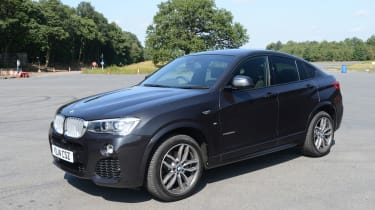 There’s nothing inherently wrong with how the BMW X4 performs – it’s quick, comfortable, beautifully built and has good economy for a 4WD SUV. However, these are the same qualities that make the X3 so good. Take these similarities away, and essentially you’re paying £5,000 extra for a less practical SUV, and in our eyes it doesn’t look stylish enough to justify the extra expense.