The new BMW X5 is a fantastically capable all-rounder. It’s big, comfortable and quiet, and the diesel engines should offer decent performance with reasonable running costs. The fact there’s not one single thing that elevates the X5 above its rivals is perhaps a little unfair; the premium SUV segment remains a highly competitive and fiercely fought class.

The original BMW X5 was arguably the first true sports utility vehicle; the first car capable of mixing genuinely accomplished driving dynamics in a raised-up off-road body. But fast-forward 20 years and the market is awash with premium SUVs. Does the fourth-generation X5 still have what it takes to topple the Volvo XC90, Porsche Cayenne and Audi Q7?

Still overtly recognisable as BMW’s evergreen SUV, the latest X5 takes many of its styling cues from the smaller X3. There’s a set of bigger kidney grilles at the front, alongside a sharp lighting signature and defined body creases. The rear gives the car a more distinct personality, with slim tail-lights and boot-mounted badging. The X5 is longer, wider and taller than before.

To find out what it’s like to drive, we took a trip to the US to try the all-new X5 in popular 30d and top-spec M50d guises. We also had a go in the xDrive 40i petrol car, which BMW hopes will account for an increasing proportion of sales as the buying public turns its back on diesel. 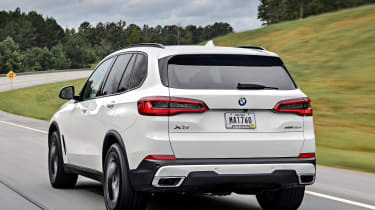 For now, however, the 30d will remain the biggest seller. After only a few miles it’s easy to see why; it’s punchy, refined and super-flexible. The familiar 3.0-litre six-cylinder diesel engine packs enough shove (0-62mph takes 6.5 seconds) for effortless overtakes, while also feeling relaxed enough for motorway cruising. The new eight-speed automatic transmission remains one the best gearboxes in the business.

The rear-biased xDrive all-wheel drive system is now able to split its 620Nm of torque between the front and rear axles for what BMW calls “even greater precision and speed on demand”. While it is sharper to drive than the old X5, the latest Porsche Cayenne will show it a clean pair of heels on a twisty piece of road.

But that’s not to say it’s sloppy through the bends. In fact it’s surprisingly agile for a 2.2-tonne SUV; the steering is accurate and body control is good, while the ride was compliant and composed on our car’s twin-axle air suspension. It’s far preferable to the M50d’s less settled Adaptive M Suspension, that’s for sure.

Unsurprisingly, the basic 30d is our pick of the range. It’ll happily return 40mpg, while favourable CO2 emissions place it on par with the petrol version when it comes to company car tax. Those after even lower running costs should wait for the xDrive 45e plug-in hybrid due in 2019. 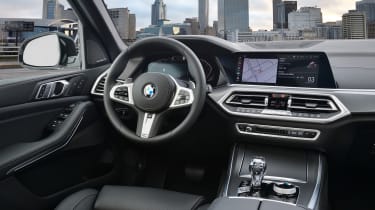 Yet as much as the original X5 set the benchmark for sporty handling, the way people use these cars means it has to be a talented motorway cruiser, too. Luckily, BMW’s semi-autonomous driving functions work brilliantly, and successfully limit the stress associated with longer journeys or stop-start traffic.

We trialled the firm’s latest Driving Assistant Professional pack during Atlanta’s heavy morning rush hour and quickly learnt to rely on the intuitive Active Cruise Control system. BMW has tweaked the Stop & Go set-up to reinitiate after sitting still for up to 30 seconds, which adds another layer of convenience to the skilful system. It’s completely unflustered by merging traffic, and was only ever caught out when one lane widened into two.

In a first for BMW, the X5 will also be available with an Off-Road package. Adding underbody protection and a rear differential lock, the driver can engage a variety of drive modes to tweak the DSC system and help control the car. Our short off-road route in the 40i showed the X5 to be capable enough on loose ground, but a Range Rover Sport is still more proficient when things get rough. 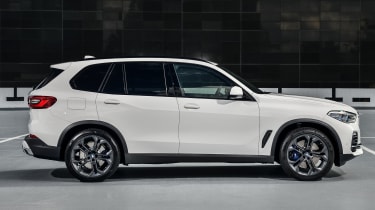 Elsewhere, the all-new X5 boasts a completely overhauled interior, with a beautifully crafted dashboard and slick 12.3-inch touchscreen infotainment system. The resolution and graphics are super-sharp, while the iDrive set-up is reassuringly intuitive to use.

The digital dials aren’t as complex or customisable as Audi’s Virtual Cockpit, but they add a layer of luxury missing from the old car. BMW has even seen sense in fitting Apple CarPlay as standard, though the inclusion of Android Auto is still notable by its absence.

Two specs (as well as the standalone M50d) will be available at launch. Even entry-level xLine cars like ours include 19-inch alloys, LED lights, wireless phone charging and a Wifi hotspot. Other kit includes heated front sports seats, automatic wipers and that excellent air suspension system.

Up to 80 per cent of British buyers will opt for the M Sport car, however. The racier spec costs £3,500 extra, but adds larger 20-inch wheels, an M-specific body kit, aluminium interior trim and illuminated door sills. BMW will offer various option packs, too, including a Visibility Package with laser headlights that can shine up to 500 metres on full beam.

Space in the back is very good. Despite every version getting all-wheel drive as standard, there’s little in the way of a transmission tunnel – so three across the rear bench is entirely feasible. Unfortunately none of the cars on our US launch were fitted with the optional (£1,390) third row of seats, but it’s unlikely to be as spacious as a Land Rover Discovery for those in the very back.

The electrically operated tailgate splits in two, revealing a useful ledge for help when loading heavier items. The 645-litre load bay is competitive, but the 1,860-litre maximum means it slots in behind the forthcoming Mercedes GLE for outright space.