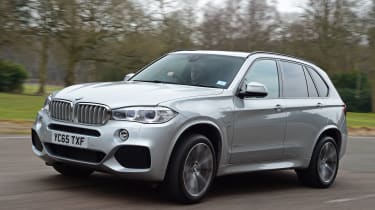 In some respects, the X5 xDrive40e offers the best of both worlds, but in others it’s fundamentally flawed. For most, the cheaper diesel will prove a more logical long-term proposition, with its smooth power delivery and admirable real-world economy. The X5 PHEV does offer company car drivers rock bottom tax bills, but private buyers looking to dodge VED and London’s hefty daily Congestion Charge will be better off in Volvo’s brilliant XC90 T8 Twin Engine hybrid.

Fitting an SUV with a plug-in petrol-electric drivetrain makes perfect sense. The raised ride height and bulky body offer plenty of room for the cumbersome batteries, and the already heavy kerbweight masks the negative effects that the extra bulk of the complex hybrid powertrain can have.

Mitsubishi was the trailblazer, and has seen huge success with the Outlander PHEV. Since then, Porsche, Volvo, and Audi have all electrified their SUVs, with countless customers benefitting from big government subsidies for plug-in and all-electric vehicles.

Now, though, BMW has fitted a powerful 111bhp electric motor to its 2.0-litre four-cylinder turbocharged petrol engine and dumped it in the X5 SUV. Total output is a healthy 309bhp – but with an additional 235kg to haul around, it was going to need some extra grunt. 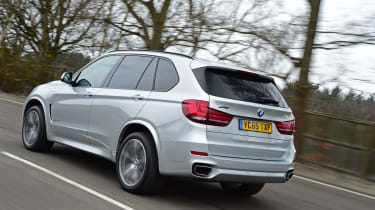 On paper, the X5 xDrive40e covers the benchmark 0-62mph sprint in exactly the same time as the decidedly less-potent 254bhp xDrive30d. Official figures suggest the hybrid is almost twice as frugal, though (83.1mpg vs 47.1mpg) while CO2 emissions dip from 158g/km to just 78g/km.

However, like all plug-in hybrids, you’ll need regular access to a charge point to realise these figures on the road. In our hands, the 19-mile EV range ran down rather quickly, and left us averaging closer to 30mpg once the batteries had gone flat.

What’s more, the seemingly impressive CO2 emissions are actually not that remarkable when you compare them with Volvo’s 49g/km T8 Twin Engine Hybrid. That car will trump the BMW’s electric-only range, too, claiming 25 miles from a full charge. 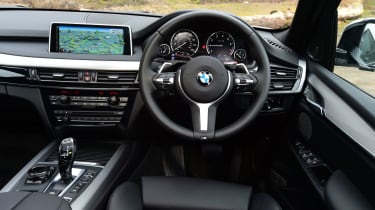 Like many hybrids, the X5 xDrive40e offers you a choice of modes to help regulate battery use. Auto eDrive uses the electric motor as much as possible, while the Save Battery function allows drivers to keep the car’s EV power in reserve for emission-free town driving later in their journey. These are in addition to the X5’s usual EcoPro, Comfort, Sport and Sport+ functions, which alter the throttle response, damper and steering settings, as well as the automatic gearbox’s shift pattern.

Instant torque from the electric motor ensures swift progress off the line, but things feel strained when the engine kicks in – leaving you longing for the grunt from BMW’s brilliant six-cylinder diesel. The gearbox isn’t always sure which cog to grab, either, and the steering doesn’t feel as direct as it does on the smaller but similarly powered 330e saloon. Grip from the quick-thinking xDrive system is exemplary, but the ride isn’t as compliant as the well-damped diesel – feeling firmer around town and more susceptible to motorway expansion joints and large potholes.

And that’s this car’s biggest problem. As a standalone SUV, the xDrive40e is very well mannered, but when you know how good the X5 can be given a punchy yet frugal diesel engine, it leaves you feeling somewhat short-changed. That said, an ability to travel through the city in complete silence is hugely appealing, and the rock-bottom Benefit in Kind (BiK) tax band will swing it for many company car drivers. 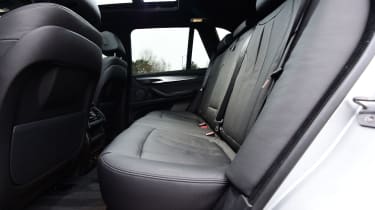 In reality, though, if your commute involves regular motorway jaunts the diesel is far better suited; feeling smooth, fast and easier to live with. The diesel’s progressive power delivery is easier to predict, whereas the plug-in’s indecision to use petrol power, electric power or both can make for jolted progress at higher speeds. You can’t fault refinement though, with wind noise well suppressed, and only a small amount of road noise from the wide-section front and rear tyres.

Of course, both the PHEV and the diesel come well-equipped. The £56,705 list price makes the X5 xDrive40e M Sport £2,445 more expensive than the equivalent 3.0-litre diesel, broadly matching it spec-for-spec. It’s suitably luxurious, too, and really doesn’t feel two years older than either the XC90 or Audi Q7. 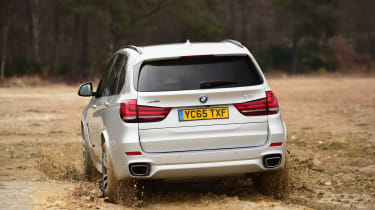 However, while you get full-leather, 19-inch wheels and Professional Nav on both the 40e and 30d, if you opt for the hybrid, you’ll have to make do with five seats rather than seven.

Due to the bulky batteries, BMW’s engineers have had to forgo the additional boot-mounted seats, thereby shrinking the available load area from 650 litres to just 500 litres. That’s not to say they’ve transformed it from a large SUV into an X3-rivalling mid-size crossover – the 40e still feels like a big car, with plenty of room in the rear seats for three six-foot adults.