The X7 is one of the best large SUVs to drive, but certainly feels its size

BMW has a reputation for making some of the best-driving cars on sale and remarkably this has extended to include its largest, heaviest model. The X7 is not a sports car by any means, but is a two-tonne SUV that manages to engage its driver and offer up handling characteristics that go some way to disguise its considerable weight.

There’s plenty of power on offer, with the smooth, straight-six diesel the perfect match for such a luxurious SUV.

Continuing on the luxury theme, the X7 rides beautifully – it’s sprung quite softly for a modern SUV and offers a smooth ride over all varieties of rough British tarmac. The trade-off is body control that’s not as well-controlled as in more stiffly sprung cars – the X7 rolls in corners and exhibits light pitching and rolling over the worst bumps.

Overall the X7 is surprisingly good from a driver’s point of view. The usual BMW traits of well-weighted steering, a good driving position, big reserves of grip, smooth automatic gearboxes and punchy engines means the big SUV is easily a match for the Land Rover Discovery in this department, all the while feeling more agile on the move. 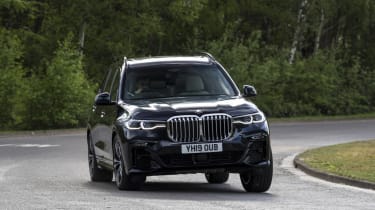 The X7 comes with a choice of powerful engines, none of which have fewer than six cylinders. The xDrive40d is the cheapest choice and also the most efficient; its twin-turbo 3.0-litre straight-six diesel produces 335bhp while returning up to 36.2mpg. There’s plenty of torque available low in the rev-range so acceleration is decent: 0-62mph officially takes 6.1 seconds.

The more powerful diesel option is found in the M50d – a quad-turbo 3.0-litre straight six with 395bhp. It’s predictably fast; 0-62mph takes just 5.4 seconds and overtaking is effortless – far more so than it should be in such a heavy car. However, unless you really fancy the extra punch and more aggressive looks, the XDrive40d does much the same job for significantly less cash.

There are two petrol options: the entry-level xDrive40i and the high-performance M50i. The former has 335bhp and the latter 523bhp, powered by 3.0-litre straight-six and 4.4-litre V8 engines respectively. Neither will be kind to your wallet but the less powerful xDrive40i may suit lower-mileage users. The M50i gets to 62mph from rest in a faintly ridiculous 4.7 seconds – just one second slower than the BMW M850i coupe that shares its engine.