The X7 is one of the most practical cars in its class, not least because it’s so big

The BMW X7 is a large seven-seat SUV that will happily accommodate large families or groups of executives alike – it’s very spacious inside the large cabin, which in turn only helps to increase its luxurious feel.

Up front, the driver benefits from BMW’s proven ability to create a near-perfect driving position; there’s loads of electrically actuated adjustment in the standard-fit Comfort seats and steering column. There’s a great view out over the car’s long, squared-off bonnet, while all-round visibility is excellent thanks to a huge glasshouse. The standard parking assistance features do a good job of helping out in tighter spots.

Along with the predictably massive boot, interior storage is plentiful – big door bins, a large centre cubby and plenty of cup holders, including for the passengers in the rearmost seats.

The X7 is one of the very largest cars on sale in the UK – it’s 5,151mm long, 1,805mm tall and exactly 2,000mm wide. Parking a car as big as this in multi-storey car parks will always be a challenge, especially given that you’d almost fit a Suzuki Jimny in its wheelbase. The Land Rover Discovery and Volvo XC90 are both a little shorter and narrower.

The BMW X7 comes with seven seats as standard and unlike some rivals it offers all seven of its occupants a luxurious, spacious journey; it’s not dark or cramped in the rearmost seats. A six-seat configuration is available for just under £300, replacing the central bench with two armchair-type seats. This is a good option if you don’t need the extra seat as access to the rear is improved.

Front and middle-row passengers have buckets of room in all directions, while those in the rear will find little to complain about. There are ISOfix points on the outer two middle seats and two in the rear as an added bonus for large families. 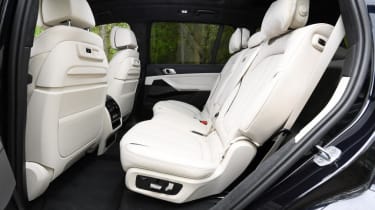 The BMW X7 has a big boot, even with all seven seats in place. With seven occupants it’ll hold 326 litres, comfortably more than you get in a Discovery or XC90. Fold down the third row and there’s 750 litres – considerably less than the Discovery’s 1,137 in the same configuration. Naturally, all rear seats fold at the touch of a button.

Fold down the middle row and there’s a van-like 2,120 litres to play with. By contrast, the Volvo XC90 has 1,816 litres. However, the X7 can’t quite match the Discovery’s cavernous 2,406 litre boot for outright space. Regardless, the BMW’s boot is well-shaped and perfect for moving furniture and suitcases alike – the loading of which is made easier by a split tailgate. 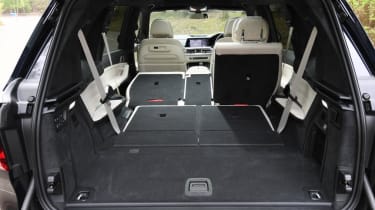 The X7 makes for a particularly opulent tow car - xDrive30d models can tow a 2,200kg braked trailer or 750kg unbraked, while the M50d improves on the braked figure with a 2,600kg rating. All models can be fitted with a tow hitch at no extra cost. The petrol-powered xDrive40i has the same ratings as the xDrive30d, while the M50i has the biggest braked rating at 2,700kg.

Those looking to tow the most weight possible are still better served by the Land Rover Discovery and its 3,500kg rating.