The BMW X7 is a large, expensive car with running costs to match – regardless of which engine you pick

The BMW X7 is not a car that’s likely to be bought with running costs in mind. It’s asking price puts it in the upper reaches of the luxury SUV segment, with only ultra-luxury offerings like the Bentley Bentayga and Range Rover commanding bigger premiums. The entry-level model will set you back just over £75,000; prices climb to almost £93,000 for the top-flight M50i and will easily breach the six-figure mark when you start ticking the options.

The most efficient model in the range is, predictably, the least powerful diesel option. The xDrive40d manages up to 36.2mpg on the combined cycle and emits from 203g/km of CO2 – not terrible for a car of this size and weight. The M50d also just manages to break into the thirties with its 31.4mpg, though emissions take a hike to 235g/km.

Petrol power brings higher fuel consumption and emissions: xDrive40i models return up to 25.7mpg and 249g/km of CO2, while the V8-powered M50i pays the price for its considerable performance with 22.1mpg economy and hefty emissions of 290g/km.

Company car users will have to brace themselves for big bills – all models sit in the uppermost 37% Benefit in Kind percentage charge bracket. Private owners will be liable to pay large first-year VED payments (usually rolled into the on-the-road prices), plus a £325 surcharge on top of the base-rate £150 per year. This will bring road tax bills in years two to six of ownership to £475 per year

Notable by its absence in the range is a plug-in hybrid variant of the X7 – rivals including the XC90 T8 Twin Engine and Range Rover P400e offer this option and can be driven on electric power alone over shorter distances. If you plan to spend most of your time in town, it’s worth considering these alternatives. 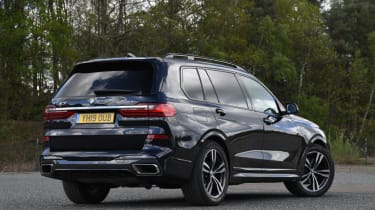 The high-cost theme continues when it comes to insurance, with all models occupying insurance group 50 – the highest possible. By contrast, the XC90 spans groups 38 to 45 and the Land Rover Discovery groups 33 to 42.

Our experts predict that the X7 will retain a decent chunk of its value after three years and 36,000 miles, but the fact remains that those buying brand new will stand to lose around £40,000 to depreciation over that period. Depending on spec, the X7 should hold on to around 51% to 56% of its original value come trade-in time – with xDrive40i M Sport versions expected to fare best. Models specified with the expensive Ultimate Pack will, on average, fare slightly worse over the three year period - holding onto around 46% of their original list price.