It's the cheaper alternative to the M Roadster, but does the new BMW Z4 feel like second best? 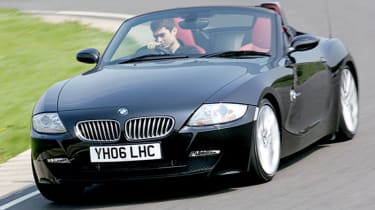 Compare the new Z4 3.0 with the M Roadster and it makes the flagship look very expensive. Sharper styling gives every model in the range a new lease of life, while the speedy electric hood and gutsy performance make the BMW a truly attractive proposition. The car has only one problem - Porsche's latest Boxster is still more rewarding, even in entry-level form.

Thrilling flagship models are all very well, but how many of us can afford the range-topper? If you'd love to buy your new car with all the bells and whistles, yet only have the budget to finance a cheaper alternative, you could be left feeling disappointed.

BMW's M Roadster is a case in point - it's got plenty of headline-grabbing figures, but its £42,795 price tag is by far the most striking. Now the facelifted version of the Z4 has arrived in the UK, many buyers will have to opt for a lesser model, so BMW has put together a fitting understudy to the flagship.

The 3.0si Sport might play second fiddle to the M Roadster, but on paper it has lots to offer. Powered by the firm's latest 3.0-litre six-cylinder engine, it covers 0-62mph in an impressive 5.7 seconds - 0.7 seconds behind the M - with a top speed limited to 155mph.

While it lacks the visual muscle of the range-topper, with the revised Z4's clear lamp clusters and new rear lights it looks fresh and dramatic. Inside, the cabin remains largely unchanged with solid build and sound ergonomics.

Fire up the 3.0-litre 261bhp motor and the gruff exhaust note immediately sets the tone. Slot the superb standard-fit six-speed manual gearbox into first, and the Z4 rockets off the line. Thanks to instant low-down torque, throttle response is superb and performance feels as fast as the figures suggest. Yet while the styling tweaks are subtle, the chassis revisions are non-existent. With rear-wheel drive and meaty steering, the BMW is entertaining to drive, but its set-up and suspension still can't match the sublime standards of the Porsche Boxster. The Z4 simply lacks the body control and accuracy of its rival.