It didn't seem so long ago that car manufacturers were telling everyone the small coupé was dead. Ford pulled the plug on the Puma and Cougar, while Volkswagen canned the Corrado and Vauxhall binned its Bertone-designed Astra. 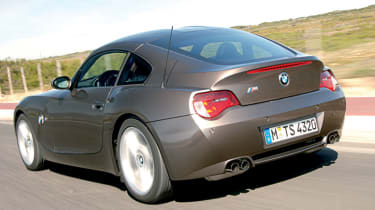 There's plenty of competition for the Z4 M Coupé, ranging from the new Audi TT to Porsche's Cayman. In converting the roadster into a coupé, BMW has made some compromises, not least when it comes to the amount of space on offer. However it's the car's powerful character and demanding road manners that make it so special. Few rivals in this class serve up such sensory overload.

It didn't seem so long ago that car manufacturers were telling everyone the small coupé was dead. Ford pulled the plug on the Puma and Cougar, while Volkswagen canned the Corrado and Vauxhall binned its Bertone-designed Astra.

But a day is a long time in the motor industry, and if you look at the new car market right now, things couldn't be more different.

In May alone, there have been three new small coupés announced, including the entry-level Porsche Cayman and all-new Audi TT. But it's the third newcomer that is perhaps the most exciting - and Auto Express was first behind the wheel. Say hello to the sensational new BMW Z4 M Coupé. Unveiled at last year's Frankfurt Motor Show, it promised to be everything a good BMW M Division car should be. It's due to hit British showrooms in August, and two versions of the sleek coupé will be available - an entry-level 3.0-litre machine and this M variant, which features a potent 3.2-litre six-cylinder unit producing 343bhp.

The concept certainly looked dramatic, and the finished production car is still a head-turner. It's well proportioned and neatly finished, particularly when compared to its van-shaped predecessor, the Z3 M Coupé. However, some enthusiasts are likely to be disappointed that the car doesn't look more aggressive, particularly at the front.

Inside, the cockpit is neatly finished. Our test car featured new carbon fibre-look leather as well as satellite navigation. The bucket seats are comfortable and hold you firmly in place, but we couldn't help feel that space was at a premium - particularly for taller drivers.

Practicality is not exactly first-rate either, especially when you consider that BMW is targeting drivers who plan to use the car for holidays as well as daily commutes.

However, the one thing that BMW hasn't overlooked is the driving experience. At idle, the deep exhaust note and mechanical chatter of the straight-six engine sound fantastic. Throttle response is extremely sharp and the motor revs to an incredible 8,000rpm.

At speed, wind rumbles over the coupé's cockpit and the exhaust note fills the cabin. It's not a car you would describe as refined, but the jet-like roar suits the car's character. The hydraulic power-steering is weighty, accurate and full of feedback. When driven hard, the car is involving, raw and exciting - but it is easier to drive at the limit, as it's more forgiving, and far less intimidating than the original M Coupé.

In fact, the only real criticism we have is the throttle response, which lacked the precision of the steering and brakes. While it's no real problem while you are going quickly, at lower speeds it's more of a challenge to drive the car smoothly.

The new coupé bodywork is massively stiff, and the modified suspension quite harsh over uneven surfaces, but even so, the car feels extremely stable. Ultimately, the hard-top Z4 proves why coupés are back on man people's wish- lists. Not only does the roof boost its appeal, it has turned the Z4 from a good drivers' car, into a great one.