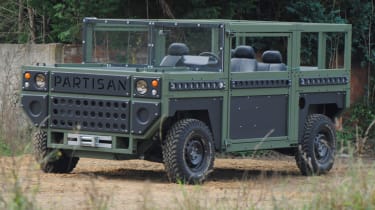 4x4s like the Mercedes G-Wagen and Land Rover Defender have gained loyal followings among buyers who need tough off-road vehicles with little or no nonsense built-in but now there’s a new kid on the block. German manufacturer Partisan Motors thinks it can challenge tough, military inspired SUVs with its new and almost unbelievably boxy model, the Partisan One.

Designed by a Russian engineer called Dr. Juri Postnikov, the Partisan One makes liberal use of right angles in its design to the point that you’d think it was styled by a scaffolder. It is made in Germany, the home of some of the world’s most revered premium car brands and yet it has a creature comfort count that would be bettered by some damp caves. At least Partisan Motors has absolute faith in its product, claiming to offer a warranty of 100 years to anyone keen enough to buy one.

While we jest, the One, is in principle a good idea. It is claimed to have been engineered on a platform that supports a host of different powertrains and body styles, along with its simple construction making repairs quick and easy. Even though it uses a 2.8-litre Fiat diesel that produces 148bhp, it is claimed to facilitate electric power, whether that be hybrid or the full EV works.

Of the body styles available, there are three- and five-door pick-ups, along with reports that 6x6 and eight-wheel-drive versions are in the pipeline. Don’t expect these to be small though, as even the model shown in our pictures is 4.72 metres long, 2.30 metres wide and 2.23 metres high.

Due to it being built primarily to meet the needs of the military, the car’s chassis has been galvanised to prevent rust and anti-mine protection is an option. Mod cons are limited to natural air conditioning and a close look at the press photos reveals pieces of string apparently holding the doors shut and a rock under the rear wheel acting as an impromptu handbrake.

Pricewise, the basic Partisan One starts at €49,500 so is not what you would call cheap. But the marque has said that it is possible to fit 5 One kits in a standard 20ft sea container, so here’s hoping one or two make it over to the UK.

Which would you pick, the Mercedes G-Class or the Partisan One? Let us know in the comments below…