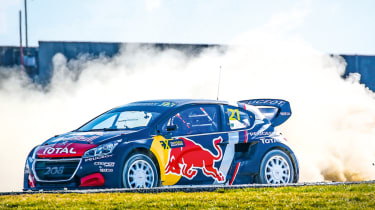 The World Rallycross Championship (World RX) blasts back into action at the Circuit de Catalunya in Barcelona this weekend, following a winter of big announcements as manufacturers step up their involvement in the fast paced, mixed-surface motorsport discipline.

Swede Johan Kristoffersen, the series’ reigning champion, forms part of an unchanged line-up at Petter Solberg’s PSRX Volkswagen Sweden team. The all-conquering Polo has been further refined for 2018, but Kristoffersen sounded a note of caution at the season launch, recalling how close his margin of victory was several times last year.

Peugeot has long had a presence in rallycross in collaboration with the family-run Swedish outfit Team Hansen, but following the conclusion of its Dakar programme, the full weight of Peugeot Sport is now behind the effort, with rally legend Sebastien Loeb and young charger Timmy Hansen on driving duty.

“To be runner-up in both last year was disappointing,” he said. “I first thought I’d focus on DTM, but when I saw the new car and learned Andreas [Bakkerud] would be my team-mate, I realised my heart pumps more for rallycross.”

Ford will have a presence on the 2018 World RX grid, too, although not in a full manufacturer capacity, with the Swedish Olsbergs MSE team fielding a pair of Fiestas for Kevin Eriksson and Robin Larssen. 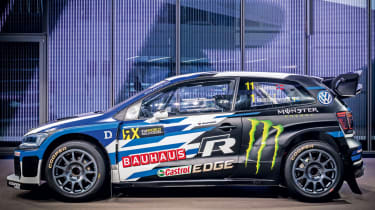 Also present will be rally veteran Marcus Gronholm’s GRX Taneco Team, which has developed ex-WRC Hyundai i20 chassis for rallycross use. Russian Timur Timerzyanov and Gronholm’s son Niclas are driving.

Finally, there’s an all-new car on the grid for 2018 in the shape of the GCK Renault Mégane. Commissioned from British motorsport engineering firm Prodrive by French driver Guerlain Chicherit, the Mégane was designed from scratch to be the perfect rallycross car, unlike the manufacturer entries, which are adapted from rally cars. 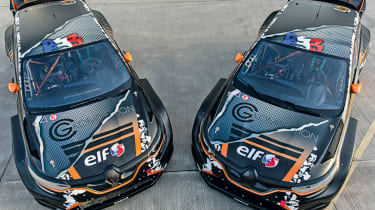 It features an ultra-low centre of gravity, innovative inboard brakes and a bespoke engine and gearbox. A two-car team composed of Chicherit and countryman Jerome Grosset-Janin will pilot the groundbreaking car.

Following this weekend’s season opener in Spain, World RX visits Portugal and Belgium before touching down at the Silverstone circuit in Northants on 25 May as part of the new Speedmachine Festival event.

Subsequent rounds take place in Norway, Sweden, Canada, France, Latvia, the US and Germany, leading up to a season finale in South Africa.

Can't get enough rally-inspired fun? Then take a look at our review of the last ever Subaru WRX STi.