There were a lot of cars at this year's Frankfurt Motor Show but these are the ones that stood out for the Auto Express team... 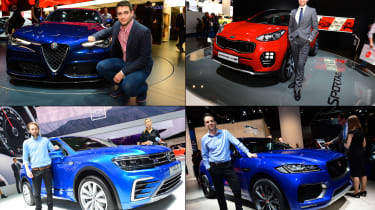 Cars, cars, cars; that pretty much sums up the 2015 Frankfurt Motor Show and we wouldn't have it any other way. Frankfurt is a huge show that's jam-packed with new metal so the Auto Express team on the ground had their work cut out covering the whole thing in two days but cover it they did and these are the cars that stood body and bumpers above the rest.

The list of new production cars and concepts had something for everyone, from high tech concept cars like the Mercedes IAA and mind-blowing hypercars like the Bugatti Vision Gran Turismo to the new Vauxhall Astra, Renault Megane and many other production models that will be on the roads in a matter of months.

Having taken it all in, the Auto Express team picked the cars below as the best the 2015 Frankfurt Motor Show had to offer…

• Nine things we learned at the 2015 Frankfurt Motor Show 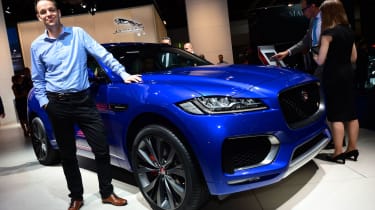 Ian Callum seemed almost overwhelmed when I spoke to him about the F-Pace. “Absolutely sensational for me,” was how he described the uniformly positive response to Jaguar’s first crossover. He admitted to being a little cautious as to how it would be received, but he had little to worry about. Callum has created an SUV that looks genuinely sporty without being contrived, like some of the coupe SUVs that have recently come to market. And it is unmistakably a Jag, too. If it is as appealing to drive as it looks, the buoyant British brand will have a true game changer on its hands. 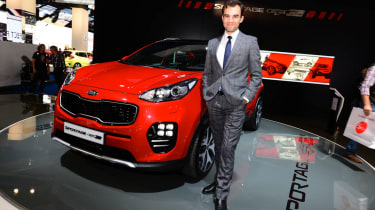 I wouldn’t want to have the job of replacing the Sportage. When the current car appeared in 2010 it transformed Kia’s image and it’s been a sales hit – 2014 was the car’s best-selling year. So Kia has responded by carefully evolving the formula – the design is a little sleeker and looks more upmarket, but the big upgrade is to the interior as it’s now better made and is nicer to look at. It’s just a shame the front-end looks a little too fussy – but I’m sure it won’t harm Brits’ fondness for the Korean car. 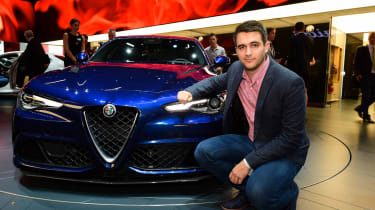 We got our first proper nose around the new Alfa Romeo Giulia QV at Frankfurt, but it’s the numbers that made me sit up and listen. Like many Alfas, the Giulia is a stunning looking car, but promises of 0-62mph in 3.9 seconds, a top speed of more than 190mph and perfect 50:50 weight distribution, makes this an unarguable star of the show. 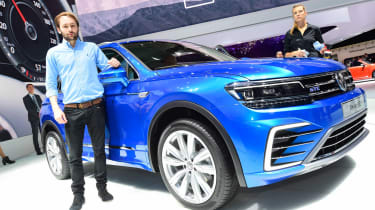 The barrage of new SUVs continues, but few are as important as the new Volkswagen Tiguan. It’s arrival at Frankfurt was one of the surprises of the show and to make sure it didn’t go unnoticed, VW also debuted a GTE plug-in hybrid version. It’s redesign also had people talking, with the softer and more curvaceous silhouette of the previous model ditched in favour of a more squat and bolder body. Based on the strength of VW’s current range, the newcomer is sure to be a runaway success. 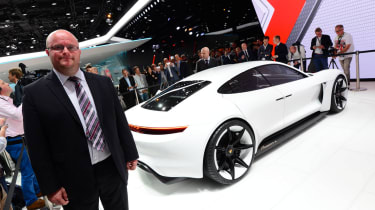 Gorgeous looks, 300 miles on a single charge and the promise of genuine Porsche performance, the production version of the Porsche Mission E concept will be a proper Tesla rival. 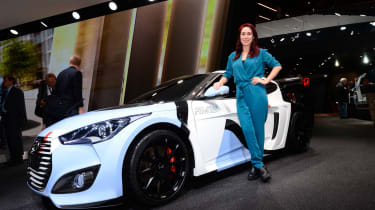 Hyundai’s performance orientated ‘N’ range could be just what the brand needs to make people think twice about what it stands for. Although the Gran Turismo concept gives us a glimpse of the extremes this new sub-brand could go to, the Hyundai i20 WRC rally concept, based on the i20 supermini, is a much more attainable view of the path Hyundai N could take. As a rally fan, the potential of a future Hyundai production car derived directly from the sport is definitely something I can getting excited about. 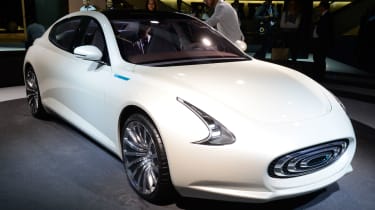 I like to support relative unknowns. And that’s why my car of the show is the Thunder Power. It’s built by a Taiwanese the electronics company of the same name that makes batteries for radio controlled cars. But this full sized version has 429bhp, a top speed of 155mph and can do up to 186miles on a 30 minute charge. Meanwhile the design is a mishmash of a Tesla Model S, Nissan 370Z and a nurse shark.

Get all the news from the 2015 Frankfurt Motor Show on our round-up page...