Can the new SsangYong Rexton challenge the Mitsubishi Outlander and Renault Koleos in the SUV class? 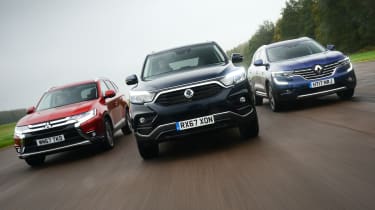 SsangYong is a true up-and-coming brand in the car world. The name might not mean much to you now, but think back to when the likes of Hyundai and Kia were building cheap hatchbacks – and look at where they are these days.

The South Korean firm had a reputation for its rugged people movers and SUVs that were generations behind their rivals, but that’s starting to change – first with the Tivoli and now with this new Rexton large SUV. It’s more upmarket than before, with better materials inside and plenty of improvements when it comes to technology.

Can it really compete with its modern rivals, though? Here we’re testing the new SsangYong alongside the established Mitsubishi Outlander, plus a relative newcomer in the Renault Koleos.

The Outlander is spacious and rugged, living up to the Rexton’s traditional values, while the Koleos is good to drive and has an upmarket feel at this price – two things the new Rexton will need to match if it wants to compete seriously in this class. 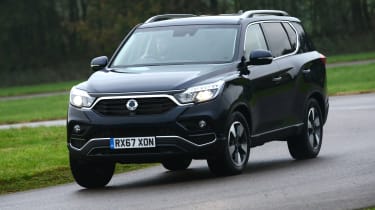 The SsangYong Rexton is a large SUV that’s available with five or seven seats. Here we’ve got the seven-seat variant in ELX automatic trim, which starts at £34,495.

While the SsangYong has been designed to compete with its European rivals, the old-fashioned chassis set-up means it really does feel more like a pick-up to drive than a modern SUV. Although the suspension deals with large bumps and potholes better than the Mitsubishi, the Rexton never settles down and the ride isn’t nearly as comfortable as the Renault’s in urban areas or on the motorway. 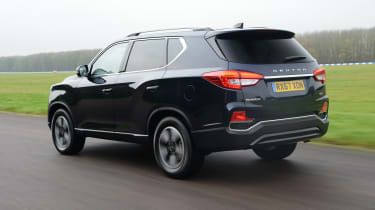 The Rexton’s low-speed ride is disappointing and feels particularly out of its depth on rough roads in town. That’s in part thanks to the high kerbweight, which also hampered it in our acceleration tests. While both of its rivals took the same 9.5 seconds to go from 0-60mph, the Rexton only managed the sprint in 10.9 seconds, and from 30-70mph it was even further behind. The lighter Mitsubishi was the fastest car here, taking 9.1 seconds, with the Renault clocking 9.5 seconds. The Rexton took 11.8 seconds, despite having the most power and torque on test.

Although its ride and performance lag behind its rivals, the Rexton does have a comfortable driving position and the 2.2-litre diesel feels punchy enough out on the road. Its 420Nm of torque is available from as low as 1,600rpm, which means there’s adequate performance available. 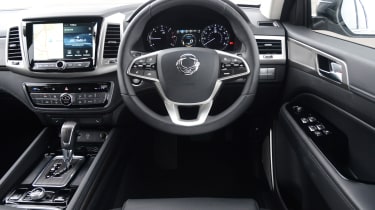 The gearbox is smooth enough when you’re driving normally but is overwhelmed if you push a bit harder; the SsangYong clearly isn’t as dynamic as the best choices in this sector. It’s more sedate than the Renault’s noisy CVT and when you’re at a cruise the Rexton is surprisingly quiet, with much less wind and road noise than you’d expect. We recorded it at 66dB at 70mph, beating the Renault’s 70dB and the Mitsubishi’s 71dB.

Testers’ notes: “The Rexton gets a selectable low-range setting for its four-wheel-drive system, which should help with progress off-road, making this the best choice if you’ll be tackling challenging terrain.” 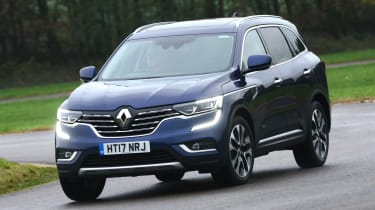 This all-new, second-generation Koleos revived a nameplate for Renault and revamped the model as a modern SUV. Here, to match the Rexton, we’re testing the 175bhp 2.0-litre diesel version with an auto box and four-wheel drive, which costs from £34,700 in Signature Nav trim.

That CVT transmission feels like any other auto box at low speed, and it’s only when you step on the gas that the revs soar and the unpleasant, constant grumble from under the bonnet appears. 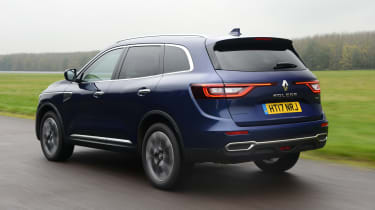 Renault’s box is one of the better CVTs, with several steps that try to emulate a normal auto by letting the revs rise and fall naturally. The steps don’t serve much purpose in ‘manual’ mode, because the box will always send the revs flying under acceleration. Unusually, the Rexton’s traditional auto does the same thing; there’s a manual mode, but putting your foot down results in a kickdown you didn’t ask for. Both are best left in auto.

This meant we weren’t able to record 30-50mph and 50-70mph figures in-gear for the Renault and SsangYong. However, on full throttle the Koleos posted a 30-50mph time of 3.7 seconds, which was well ahead of the Rexton’s 4.5 seconds and just behind the Outlander’s 3.6 seconds in third gear. 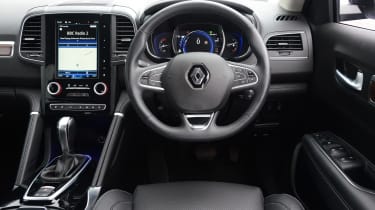 In our 50-70mph test the Renault took just 5.8 seconds, which trumped both the Mitsubishi (7.8 seconds in fifth) and the SsangYong (7.3 seconds).

The CVT still hurts refinement due to the way it makes the engine rev, while the Koleos’ diesel is the noisiest of the three in the first place. The large 19-inch wheels don’t help the ride quality, either, but the Renault does soak up big bumps reasonably well and it’s the most comfortable car here. It’s also the most fun to drive, and although the steering weight can be a bit inconsistent, getting heavy in corners, it’s grippier and more alert than its rivals. This is all relative, though, because the Koleos is still a big car that’s at its best cruising on the motorway. 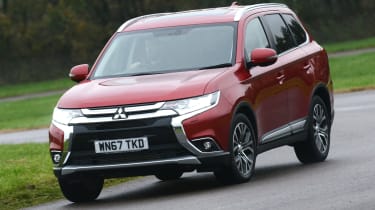 In spring 2017 the Outlander diesel range was updated with more equipment to bring it in line with the popular PHEV plug-in hybrid model. Here we’re testing the top-spec Outlander 4 2.2 diesel in automatic form, which starts at £34,055.

The Outlander has the lowest kerbweight on test, which helped it in our performance tests, as it beat the others for straight-line speed; it was quickest from 30-70mph through the gears, taking 9.1 seconds. 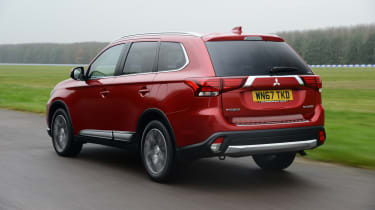 It is the only car of the three that you can hold a gear in when in manual mode, which was partly why the Japanese model performed well in this test, but it’s slow to actually change between ratios.

Despite the car’s acceptable turn of speed, the Outlander’s engine is noisy as well, rattling at higher revs where the Rexton feels smoother in comparison. The Mitsubishi’s 2.2-litre diesel produces 148bhp and 360Nm of torque from just 1,500rpm, which makes it the least powerful here and therefore its performance more impressive.

Those numbers mean that there’s acceptable performance to tow the Outlander’s maximum of 2,000kg, which is significantly lower than the Rexton’s impressive 3,500kg figure, but more than the Koleos’s 1,650kg rating. 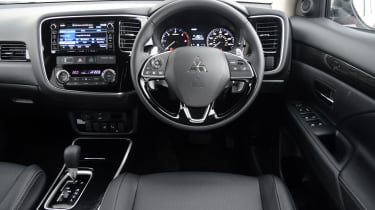 The slow steering will also be helpful when towing and off-road, but it means the Outlander isn’t as precise as the Koleos, and while there’s less body roll than in the Rexton, it’s not a long way ahead of the Korean newcomer in terms of handling.

Bumpy roads are where the Outlander loses out to both of its rivals in this test, because potholes thump through the suspension and into the cabin harshly compared with the Renault and SsangYong.

It’s about as settled as the Rexton on the motorway, but the Renault is the runaway winner here for both ride and handling, where comfort counts more than anything else.

Testers’ notes: “The Outlander is well equipped, but a dull interior design means that the Mitsubishi SUV doesn’t feel very modern, especially when it’s compared with the Koleos’s up-to-date cabin.” 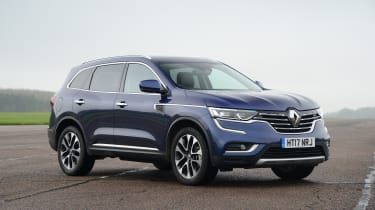 The Koleos is better to drive than either rival, but is also the most comfortable car here. There’s lots of kit at an affordable price and plenty of space inside. It lacks a little versatility over its seven-seat rivals, but has a more modern, high-quality feel. The engine offers good performance, too. Stronger residual values plus cheaper servicing and insurance mean it’ll be more cost-effective to run. 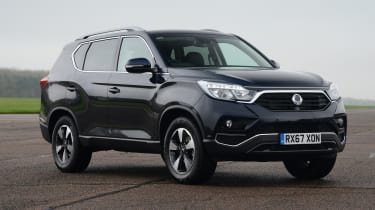 The Rexton has moved on so far from its predecessor that it’s almost unrecognisable and is certainly worth a second look. The infotainment is good and there’s loads of standard kit, while it’s also the most spacious car here. However, it’s big and cumbersome to drive, plus the ride and poor performance hold it back. Higher running costs place it second. 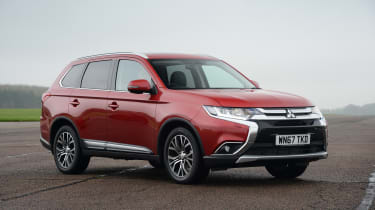 With its lengthy kit list and economical diesel engine, the Outlander has some merits; but there are more drawbacks. The harsh, bouncy ride and the old-fashioned infotainment are disappointing, while the lack of quality at this price undermines its strong fuel economy. It’s also not as spacious as its rivals, so it finishes third in this test.

Is this model worth waiting for? 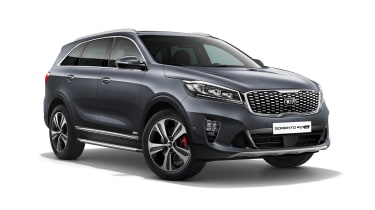 An updated Kia Sorento will hit the UK this month, complete with a new automatic gearbox. It’s an eight-speed unit that replaces the old six-speed box, helping to improve efficiency over the previous model.