We pitch Hyundai’s first performance car against Honda’s hot hatch champ - can the i30 N hold its own against the Civic Type R? 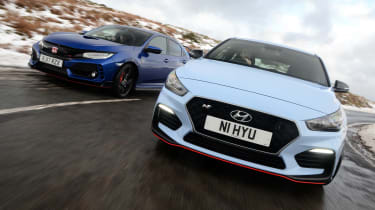 Hyundai might not be a company that springs to mind in the context of performance cars, even though it’s enjoyed some success in world rallying over the years.

And yet here we are, putting the Korean brand’s new hot hatch, the i30 N Performance, up against one of our favourite fast five-doors in the shape of the Honda Civic Type R.

The i30 N is part of a push by Hyundai to challenge the performance car establishment, and it’s gunning for the top. The Honda is our current favourite choice in this market with its incredible combination of agility, straight-line pace and everyday usability.

If the newcomer wants to rise to the top it has to beat the best, which is why it’s paired against the Honda here. With decades of development behind the Civic, does the Hyundai stack up? 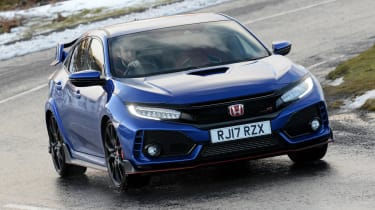 For: Sharp handling, powerful engine, great practicality, superior suspension dampingAgainst: More expensive, not as well equipped as the i30 N, infotainment system is clunky in use

The Honda Civic Type R is a well established name in the world of hot hatchbacks, and this latest model is arguably the best version the brand has ever made.

While some people might miss the screaming VTEC motors found in older cars, the current 2.0-litre turbo produces 316bhp and 400Nm of torque, which means performance is superb.

In our track tests the Honda took 5.9 seconds to reach 60mph from a standstill, which was six tenths faster than the i30 N, but both returned incredible performance given traction was limited by the snow and ice on the ground. 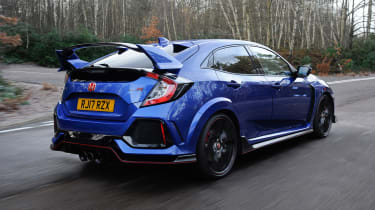 The really impressive statistic, however, is that the Type R took just 4.3 seconds to go from 30-70mph through the gears thanks to its extra torque and fantastic transmission, while the Hyundai completed the same test in 5.2 seconds.

The Civic’s exhaust note doesn’t sound as good as the i30 N’s, but the engine has an enjoyable character nevertheless: the strong mid-range torque delivers incredible pull, and the motor’s frantic nature at high revs means it’s worth holding the throttle open right up to the red line.

In third gear the Type R took just 2.2 seconds to go from 30-50mph, two tenths faster than the i30 N, and it’s here where the Honda is at its best.

That’s because this is the sort of speed you’ll be doing as you come out of a corner, and together with the Civic’s brilliant limited-slip differential, the performance is explosive. As you come on the power the Type R tightens its line, allowing exceptional cornering speed for a front-wheel-drive car. The Hyundai’s diff has a similar effect, but it’s not quite as aggressive, and the Honda’s extra power delivers more excitement. The Type R’s steering is more communicative than the i30 N’s, and it’s enjoyable whether you’re pushing hard or just going to the shops. 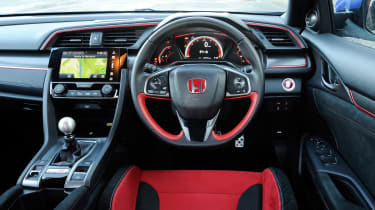 The Type R’s adaptive dampers can be set to Comfort, Sport and +R modes. There are fewer options than on the Hyundai, but the standard Sport setting is good enough for fast driving, because there’s so little body roll it’s not necessary to use the even stiffer +R mode, which is designed for track use and makes the Type R feel like a junior touring car.

Compared with its predecessor, Comfort mode is much more compliant, which means it’s better suited to daily use, but it’s still a little firmer than the i30’s softest setting. Neither is luxurious, but the Honda’s new-found breadth of ability means it’s a better everyday car now. 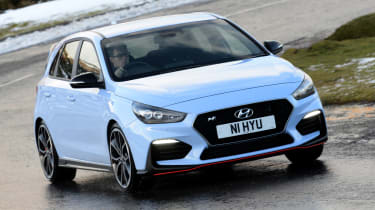 For: Fun to drive, lots of standard equipment, great value even in non-Performance trimAgainst: Dull interior, cannot match Honda’s performance or agility, not as practical as its rival

The i30 N is Hyundai’s first proper attempt at a performance car, and it’s more than a solid effort. It’s a genuinely great hot hatch that can mix it with the best models in its class.

The N in the name stands for two things: Nürburgring, the race track where the car was partly developed, and Namyang, Hyundai’s global R&D Centre in South Korea. The model’s development was overseen by Albert Biermann, former boss of BMW’s M Division, who reckons that if you can get a car to perform well at the notorious German circuit, then you can get it to perform well just about anywhere.

There’s a 271bhp 2.0-litre turbo petrol engine in the i30 N Performance, which is down on power next to its Honda rival. Yet it’s hardly lacking pace, because with a maximum of 378Nm of torque on overboost, there’s plenty of shove, and the i30 was faster in some gears. 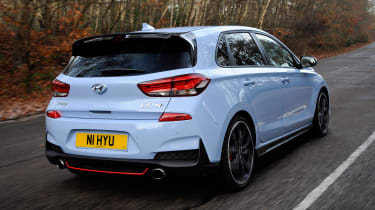 In fourth, the car took just 3.1 seconds to go from 30-50mph, whereas the Civic posted a time of 3.4 seconds. Plus, in sixth the Hyundai went from 50-70mph in 5.4 seconds, three tenths faster than the Type R. That highlights a small difference in the gearing, but also how strong the i30 N’s engine is. It only feels a little behind the Honda for all-out pace, and that’s apparent through a series of bends.

The new car’s steering is precise, but feels artificially weighty and too heavy in N mode. The clever adaptive dampers control body roll nearly as well as the Type R, while the feedback from the chassis gives you the confidence to push the Hyundai hard; and it’s rewarding to do so. It’s not quite as razor-sharp as the Civic in the most hardcore setting, partly because the i30’s 49kg heavier kerbweight dulls the responses slightly, but the i30 N is a little more comfy with the dampers in their softest setting.

Just like Honda’s +R mode, the i30’s N setting is too stiff for British roads, with extremely tautly controlled vertical movement, so it’s best saved for track days. There’s also a Custom mode in the i30 N that can be set up how you like it. Custom brings options for suspension stiffness, exhaust note, rev matching, diff modes, throttle response and more. It can take a while to set these parameters up to your liking, but once dialled in it’s easy to switch it on and off with the N button. 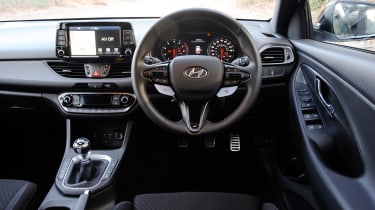 The sports exhaust sounds great, despite the engine not revving as freely as the Civic’s. While the manual is slick enough, it’s not as satisfying to use as the Honda’s superb six-speed gearbox. 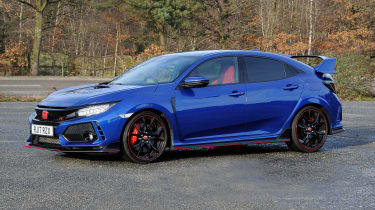 The Type R is pricier than the i30 N, but it justifies that with its handling and performance ability. It’s quicker in a straight line, as well as sharper and more capable through corners. Yet it’s more comfortable and usable than ever, with excellent practicality. 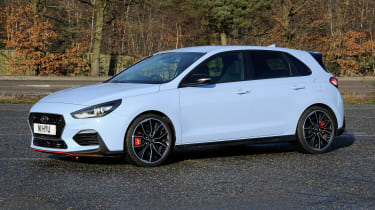 The i30 N Performance is a superb hot hatch that’s – astonishingly for a newcomer – nearly as good as the best car in the class. It’s not quite as sharp as the Civic Type R, nor as practical, but given the lower price it’s a close second place for the great-value Hyundai.