Does Audi's R8 have the performance to match its looks and upset top-flight models from Porsche, Aston Martin and Jaguar? 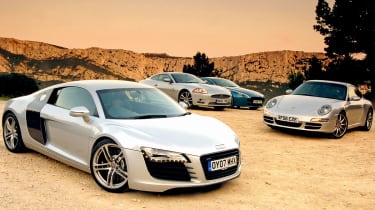 The R8 is here! It’s not as if we weren’t given plenty of warning about its impending arrival, though – Audi has been threatening to build a top-flight supercar for years.

Remember the stunning Avus concept? A mid-engined, four-wheel-drive, aluminium-bodied two-seater, it pointed the way for a high-performance model when it was unveiled at the Tokyo Motor Show back in 1991.

That’s 16 years ago – eons in automotive terms – yet since then Audi has pulled the wraps off two more prototypes that shared the same basic architecture: the Rosemeyer (2000) and RSQ (2004). It’s even been four years since the Le Mans Quattro Concept, the R8’s direct predecessor, was first seen at the Geneva expo.

But although Audi has dragged its heels, the R8 has now reached production reality, and despite the delays, it’s still a very exciting prospect. Audi owns Lamborghini, so it’s little surprise that the R8 has a certain amount in common with the Gallardo, while the mighty V8 from the RS4 promises penetrating performance, and its name is shared with the brand’s all-conquering five-time Le Mans winner.

But Audi’s sporting flagship isn’t the only car in this class to claim motorsport influence in its design. Few marques have a richer racing history than Porsche, and the current 911 is the result of more than 40 years of development. It’s one of our favourite sports cars.

And there are two British firms that can hold their heads up high, not only in the racing arena, but also in the supercoupé class. Not many cars are more desirable or handsome than the Aston Martin V8 Vantage, while the Jaguar XKR has proved that the Coventry company can build a world-class sports GT. So here we pitch the R8 against the cream of the crop to find out which firm offers the ultimate ‘everyday’ supercar.

Unfortunately for the Brits, neither can challenge the German dominance of this sector. The Jaguar XKR doesn’t move the game on far enough from the XK to become a top-level sporting machine – it’s simply too comfortable and quiet. The Aston Martin is more convincing. It’s expensive, but its exclusivity, air of controlled aggression and balanced chassis make it a tempting option.

Yet it’s not as well finished as the German pair – either in terms of cabin trim or suspension tuning. The Porsche is the polar opposite of the Jag – it’s firm and feisty, yet it remains the easiest to live with on a daily basis. But its plain cabin, costly pricing and sheer familiarity undermine the vivid driving experience, allowing the Audi R8 to nip through and claim victory. Brilliant to drive, stunning to look at and wonderful to own, Audi’s first supercar is a masterpiece. The only question that remains is why it took the firm so long to build it in the first place.