The best new cars for under £400 per month 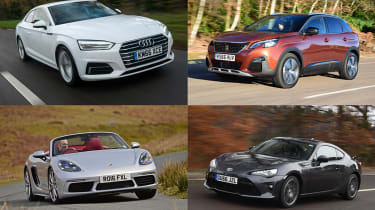 Finding a car to buy on finance for less the £400 a month isn’t at all difficult, with loads of affordable leasing deals available throughout the market. But with that kind of budget and some savvy shopping, you should be able to access some of the most desirable cars from premium manufacturers.

Anyone wanting to save money on their commute and keep cabin noise to a minimum would do well to consider the Mercedes GLC, which in diesel form hits 56.5mpg and fares well against its Audi Q5 and BMW X3 rivals.

If you’re after something sportier though, the Toyota GT86 and Porsche 718 Boxster are both available in this price range. The latter of those carries a deposit some £4,500 more than the former, but remains an appealing machine to own despite having recently dropped its dependable flat-six in favour or a turbocharged flat-four.

All the deals are Personal Contract Purchase (PCP) schemes, which means you’ll pay a deposit (unless otherwise stated) and a sequence of monthly payments. When the contract comes to an end you’ll have the option of either paying a final lump sum to take ownership of the car, using the car’s remaining value to trade-in for a new model, or you can hand back the keys and look elsewhere for a new set of wheels..

Our list of the top cars for available £400 or less can be found at the top of the page to the left. Or you can follow the links below to locate the best deals around in other price brackets: