The Morgan's a more gritty and involving drive than the Bentley 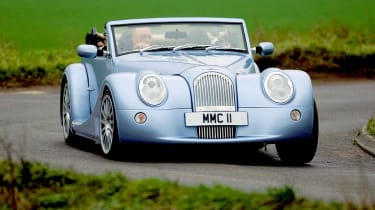 How can Morgan possibly equal the lofty standards set by the Bentley? The short answer is that it can’t. In comparison, the Malvern firm’s development budget would barely keep Crewe in tea bags for a week. But cars such as the Aero 8 are rarely bought for rational reasons, and so aren’t easy to evaluate by traditional means.

Likewise, the car’s ‘love it or loathe it’ styling isn’t going to find favour with everyone, although the fact it has lost the ‘cross-eyed’ headlamps makes the nose appear less comical. The roof is a vast improvement, too, with all-new fabric that is better insulated, and never let in a drop of water on test, despite the monsoon conditions. Compared to the all-electric Bentley it requires more physical exertion, but once practised, we could lower it in 6.8 seconds – faster than any electric hood.

The new lid stows much more neatly on the rear deck, allowing you to see over the top, and with the roof raised, the small glass window has been replaced with a larger plastic panel, making the cabin lighter and improving rear visibility. It’s just a shame it also means the Aero 8 no longer looks quite so sinister from behind.

The cabin itself takes a more sparse approach than the Bentley’s, even though it has been widened by six inches by pushing the doors further out over the sills. But it’s certainly characterful. The GTC is better appointed, yet the Morgan has a turned aluminium dash and, unlike the Bentley, the wood actually looks as if it was once part of a tree. And it doesn’t matter that the seats are narrow, the pedals are too far down the footwell and there’s not a great deal of room. Somehow these deficiencies only add to the car’s charm.

As does the BMW engine. Although the 4.4-litre V8 boasts the German firm’s latest variable valve timing systems, the motor feels very different to any BMW unit. That’s possibly because it’s so much noisier – chiefly due to the optional £1,000 side-exit exhausts fitted to our test car. And with so little weight to lug around, the 448Nm of torque gives potent acceleration.

Unfortunately we were unable to run definitive performance tests because the Aero 8 we tried had only covered 300 miles when we collected it, but it still managed to outpace the Bentley in-gear. Despite the speed and power, though, the Mor­gan isn’t intimidating to drive. It has a light gear­change, responsive – if grabby – brakes, good weight distribution, a composed chassis and offers a thoroughly modern driving experience.

The ride is rather firm and the rear wheels occasionally grind against the arches under full compression, but the handling is above reproach. Far more immediate and involving than the Bentley, the Aero 8 has fantastic turn-in grip, wonderful steering and never threatens to bite or snap suddenly. It’s one of the most rewarding sports cars we’re likely to drive this year.

The Morgan’s BMW engine is frugal as well as powerful. We achieved 27.1mpg on one tankful, although it dipped to 15.3mpg when driven hard. A final figure of 22mpg is good, considering the car’s pace.

Not enough used Aero 8s change hands for us to compile detailed second-hand prices. However, if the small ads are anything to go by, low-mileage 2003 cars are still worth upwards of £35,000.

On paper, owning a Morgan isn’t that tempting. There are only 22 dealers, short 5,000-mile intervals and a two-year warranty. But costs are low, and no other firm is likely to offer as personal a service.

After the GTC, the Morgan’s £1,519 charge sounds like a pittance. However, that’s still more than a Porsche 911. Taking out a limited mileage policy would reduce the total considerably.