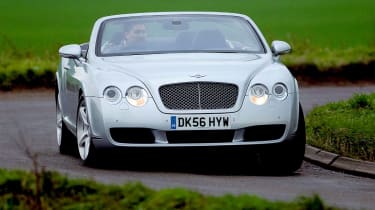 Did Bentley set itself too stiff a challenge when developing the GTC? Its target was to “create a convertible that drives exactly like its coupé count­erpart”. That’s no small task, when you consider the integral roof plays such a major role in body stiffness. Replacing it with a soft-top increases noise, vibration and body shake.

It also fundamentally changes the appearance of the car. No amount of time in the design studio would allow the GTC to look as elegant or well balanced as the GT with the roof up. But with it lowered, the soft-top is more cohesive – and although there’s nothing unusual in the way the fabric folds away, we can’t think of a quieter or smoother electric roof mechanism.

The three-layer hood is good at absorbing noise, too. At 70mph, the 66dB reading makes the GTC as quiet as a Mercedes S-Class, and gives the cabin an air of luxurious isolation. Compared to the Morgan, it’s also a much more modern cockpit, with tremendous quality in every area. The blend of leather, wood and chrome is peerless, but it’s all so smooth and well integrated, it looks almost fake compared to the more rough-edged Aero 8.

And the Bentley is also wonderfully opulent. The front seats are tremendously comfortable, and there’s a real feelgood factor, but it’s by no means faultless. The sat-nav is slow, more steering reach adjustment wouldn’t go amiss and the presence of VW electronics means it doesn’t have the same hand-made feel as the larger Azure. For such a big car, rear legroom is also decidedly modest – even though the seatbacks have been carved out to liberate an extra 30mm of knee clearance.

To provide outstanding luxury, weight saving was not at the forefront of the engineers’ minds. A 110kg gain over the coupé is modest, but at 2,475kg, the GTC is a heavyweight. And such a sizeable machine needs an equally mighty engine. Luckily, the twin-turbo W12 is more than up to the task. It emits a very understated rumble, but with 650Nm at 1,600rpm, the Continental has a tidal wave of torque that makes short work of shifting the Bentley. How does a 0-60mph sprint time of only 4.8 seconds grab you?

But it’s not how quickly the GTC goes which is most impressive – it’s the driving experience that really excels. There was never a trace of scuttle shake or unwanted vibration – it’s perhaps one of the best engineered soft-tops we’ve ever driven. It’s also surprisingly nimble, and despite the forces involved, resists understeer almost totally.

The cosseting ride, peerless refinement and lack of top-down turbulence means the only real drawback is the restrictive rear view with the roof up. But do the Bentley’s high standards justify a list price which is more than double that of the Morgan?

Price: £130,500Model tested: Bentley Continental GTC 6.0 litre/552bhpChart position: 2WHY: It has been a busy six months for Bentley convertibles. The Arnage-based Azure went on sale last summer, while this GTC arrived a month ago. It has the same twin-turbo W12 and 4WD system as the GT, plus an electric roof and super-stiff structure.

The boffins who compile our residual tables haven’t got all the data for the GTC yet, but hint that it will outstrip the values of the Conti GT coupé, which is worth 51.5 per cent of its list price after three years.

Most owners will be wealthy enough not to bat an eyelid at the servicing costs. The total for the first three visits is an astronomical £2,650. However, for that price, customer service should be peerless.

An expensive car will be costly to run – but annual cover of £4,041 for the GTC is rather mind-blowing. It’s the highest quote we’ve ever had, and was only obtained via the AA’s specialist Select department.