Park the latest Yaris alongside its predecessor, and it’s obvious how much the car has grown. 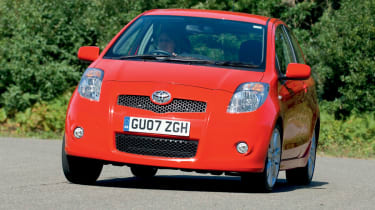 Park the latest Yaris alongside its predecessor, and it’s obvious how much the car has grown. Toyota is pitching the model somewhere between a supermini and small MPV, hence the rather tall profile.

While the car in our pictures is the range-topping 1.8 SR, the 1.3-litre version has slightly more conventional, less sporty styling. It lacks the 1.8’s honeycombe grille, side skirts and rides on 15-inch wheels rather than 17-inchers.

Nevertheless, it’s the best-looking car here, and has a more premium feel than either the Citroen or Renault. The doors close with a reassuring thud and there’s a general impression of solidity missing from either rival.

The cabin is top-quality, too. Admittedly, it’s not particularly sporty, but a much more pleasant environment than either the Twingo or C2’s interior, with soft-touch plastics and modern switchgear. What’s more, the layout is stylish, with a neat central stack of ventilation controls.

However, it’s a shame the driving position is so high. And although the seats are comfortable, they lack lateral support. We’re pleased, though, that the conventional analogue speedo of the 1.8 you can see in our pictures does not appear in the 1.3. We think that its green digital display suits the Yaris’s hi-tech image a little better.

Storage is good, though, as a split-level floor boosts luggage space in the boot. The Yaris is the best choice for rear passengers, too. While the Twingo has more legroom, the Toyota offers extra headspace, and is the only car tested that can carry three in the back. The rear seats also slide independently in a 60:40 split.

Around town, the Yaris is easy to drive, thanks to its light controls, although a springy clutch and sensitive brake pedal aren’t ideal. But with a turning circle of only 9.4 metres – a metre less than either rival – manoeuvrability is excellent.

Take the SR on the open road, and it’s obvious that Toyota has made a considerable effort with the Yaris’s chassis. It has quicker reactions and much less body movement than either rival, making it more enjoyable on twisting roads.

However, the trade-off is a firmer ride, even if it’s not as crashy as the Renault’s. And although the electric power-steering is sharp, it still feels a little artificial. Yet in this department, it is the best of the cars tested here.

The positive five-speed gearbox is also better than either rival’s, but the 1.3-litre engine is sluggish and has to be worked hard to get decent pace, while the Yaris’s torque deficit is clear at motorway speeds.

With only 85bhp and 121Nm, it’s the least powerful powerplant, and this showed during our performance tests. The 0-60mph sprint took 11.9 seconds – 1.7 seconds longer than the Renault – and the in-gear figures trailed behind, too. The Yaris certainly never feels quick, and at higher speeds the engine is unresponsive.

If you can cope with the relative lack of performance, then the Toyota offers great value for money. At £10,645, it is only £650 more than the Twingo, but the quality and finish defy the price tag. Equipment is generous, too – the SR has climate control, a multifunction steering wheel, electric windows and sliding rear seats as standard. It also features seven airbags, compared to six in the C2, and only four in the Twingo. Will this be enough to secure victory?

The Toyota has the least power of this trio, but with an official combined figure of 47.1mpg, it offers decent economy. We averaged 36.2mpg, while a 42-litre fuel tank gives it a range of 334 miles – 20 miles ahead of the Twingo.

No surprise that given Toyota’s strong image for quality and reliability, the Yaris is a pretty good performer when it comes to used values. A figure of 47.6 per cent is the best here, and means the SR will hold on to £5,067 of its list price.

Not only did Toyota’s dealers finish an impressive fourth overall in our Driver Power survey results, but the Japanese brand’s supermini is the cheapest car on test to look after: it’s £520 for the first three visits.

As well as the least powerful engine here, the Yaris has the highest emissions. It still qualifies for the lowest tax bracket, though, and for basic rate owners will cost £351 a year. That’s £21 more than the Twingo, but £180 less than the C2.