They say the best things come to those who wait. Well, it has taken 14 years for the Twingo to arrive in the UK 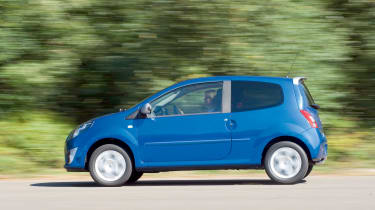 They say the best things come to those who wait. Well, it has taken 14 years for the Twingo to arrive in the UK – so is the second-generation model about to reveal what we Brits have been missing out on?

It’s longer, taller and wider than its predecessor, but is still smaller than its rivals here. The front has a friendly face, but overall the styling looks strangely dated for a new car, and the Twingo is uninspiring when compared to fashion-driven models such as the Fiat 500.

It has a similar shape to the C2, with virtually no overhang at the rear, but the silver roof spoiler and wing mirrors of this GT model look out of place. Once inside, the cabin feels light and airy – this is helped by the optional sunroof – but the driver’s seat is set too high and headroom for both front occupants isn’t great.

There are some neat touches, though – in particular the Smart ForTwo-inspired rev counter in front of the steering wheel and the easy-to-read digital speedo on the centre console. The rest of the interior isn’t particularly adventurous, but it has a simple layout, and the deep door pockets and dashtop tray provide stowage.

Look closer, and there is evidence of cost cutting. The plastics aren’t as shiny as those in the Citroen, but they feel cheap compared to the Toyota’s, and large parts of the steering mechanism and dash wiring are left exposed in the narrow footwell.

However, the interior is versatile. The individual rear chairs slide back and forth by 22cm, which allows more legroom than in the C2. Boot length also varies between 340mm and 530mm, which is better than the Citroen can manage. It’s only with the seats pushed fully forward that the Twingo can match the Yaris for load space, though.

Under the bonnet, the Twingo benefits from Renault’s new 1.2-litre TCE (Turbo Control Efficiency) engine. This generates decent power from a small capacity and has better economy and emissions than a normally aspirated unit of similar output.

While it claims to achieve 47.8mpg, we only averaged 35.9mpg during our time with the car. Nevertheless, the 98bhp unit delivers punchy performance. Peak torque arrives at 3,000rpm and it outperformed the Yaris in all of our acceleration tests. It was also impressively close to the more powerful C2.

The diesel Citroen has 115Nm more torque – 260Nm against 145Nm for the Twingo – but the Renault was within a couple of tenths of a second of the C2 in third and fourth, and it was only in fifth that the VTS had a big advantage. Although acceleration is impressive, the throttle response is somewhat delayed and power delivery is a little sudden.

But the biggest problem is the Renault’s lack of refinement. At high revs the 1.2-litre unit is thrashy, and engine noise is intrusive at motorway speeds. All three cars have five-speed gearboxes, but the GT pulls 3,500rpm at 70mph, compared to the 2,500rpm of the C2, while the Toyota has better sound insulation.

The Twingo’s dynamics are a mixed bag. It’s simple to drive around town, thanks to the light, precise steering and a gearshift that’s far slicker than the Citroen’s. However, on twisty roads there’s too much body roll, the chassis loses composure when pushed and the Renault becomes easily unbalanced.

So while the Twingo is good value, the GT version is no baby hot hatch. And it can’t match the Citroen’s running costs, either.

By using a turbo, the Renault generates good power and has better economy than a normally aspirated engine of similar output. The 47.8mpg official figure is close to the Yaris’s, although both are nearly 20mpg behind the Citroen.

It’s brand new, so used prices for the Twingo have yet to be calculated. However, if the identically engined Clio and Modus are anything to go by, buyers can expect retained values of between 38 and 39 per cent.

The Twingo is the most expensive of this trio to maintain – the first three check-ups cost a total of £740. The dealer network performed poorly in our 2007 Driver Power satisfaction survey, finishing a lowly 30th out of 32 firms.

Neither the Renault or Toyota can match the diesel Citroen’s low emissions. But their petrol units place them in the 15 per cent tax bracket and, with its cheaper list price, the Twingo works out as the most economical choice.