French manufacturers have generally had a strong reputation for producing entertaining small hatchbacks. 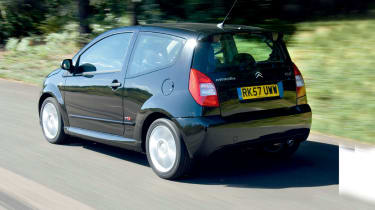 French manufacturers have generally had a strong reputation for producing entertaining small hatchbacks. Past models haven’t always been particularly well built or refined to drive, but that hasn’t diminished their popularity. Take the Citroen Saxo, for example. Despite its shortcomings, the supermini was a real success for the firm, especially with younger buyers.

It’s this image that Citroen wanted to keep alive when it launched the C2 in 2003, and that’s plain to see in the styling. With sharp lines and flared wheelarches, the basic shape suits a sporty upgrade, and this flagship VTS model certainly looks the part when compared to the GT-spec Twingo.

Large headlights dominate the front end, while the foglamps are neatly incorporated into the bumper. It’s well proportioned, too – although we’re not convinced by the break in the window line caused by the angular side glass.

Considering the C2’s modern lines outside, we expected more from the interior, but it’s a real letdown. Despite some neat touches, such as the sporty metal pedals, overall it’s bland, and build quality is way behind the Toyota’s. Grey plastic dominates, and aside from the simple white rev counter and digital speedo, there’s little to get excited about.

The driving position is good – you sit low, and while there’s less space than in the Renault or Toyota, the seats are comfortable, although they are a little narrow and lack side support.

At 3,666mm, the C2 is 66mm longer than the Twingo, but it has the shortest wheelbase here, and as a result, rear passengers suffer. The space is cramped, with minimal legroom, while a low roof height means that headspace is restricted, too.

Thankfully there’s better news once on the move. The 1.6-litre HDi diesel is excellent. With 110bhp, it has a 12bhp advantage over the Twingo, but it’s the 260Nm of torque, more than twice that of the Yaris, which makes the real difference. At the track it helped the Citroen to post the fastest 0-60mph time of 9.7 seconds, half a second quicker than the Renault. And it’s no surprise that the C2 also recorded the best in-gear times.

With torque peaking at a low 2,000rpm, the Citroen’s punchy nature means it’s nippy away from the lights and is also more suited to longer journeys. The unit is fairly noisy at idle, especially when compared to the petrol powerplants of either rival, but a meter reading of 70dB at 70mph was 2dB quieter than the frantic Renault.

On twisty roads, the VTS offers lots of grip and turns in sharply, but the steering feels too artificial for a hot hatch, and there is noticeable kickback through the column. The C2 is certainly not as agile as the Yaris, but it’s more stable than the Renault. The ride is quite firm, too, while the damping fails to iron out rough surfaces.

Surprisingly – and despite Citroen’s reputation for value – the C2 is the most expensive choice here. Admittedly the diesel VTS is the range- topping model, but it’s disappointing that climate control and sliding rear seats are optional – they’re standard on the cheaper Yaris.

However, the firm is renowned for its discount deals, and it’s highly unlikely you would pay full price for the C2 in the first place. For instance, the 1.6-litre petrol variant of the VTS is currently being offered with £2,405 cashback. Hunt around and you’ll almost certainly get a deal on the diesel, too.

Fitting a 1.6-litre diesel in a city car not only brings excellent pace, but also means the C2 is very economical. We averaged 47.0mpg, while the official figure is 64.2mpg! Either way, the Citroen is miles ahead for economy.

It’s the oldest of this trio and the C2 also has the worst residual values. After three years this range-topping diesel model is only predicted to be worth 36.6 per cent of its original price. That works out at just £4,904.

Considering Citroen’s image as a value brand, we were surprised by the comparatively high price of servicing – £686 for the first three visits. But the firm’s dealers fared better than Renault in Driver Power, ending up in 24th place.

Thanks to its efficient HDi engine, the Citroen emits only 119g/km of CO2 –20g/km less than either rival. As a diesel, though, it incurs a three per cent penalty. Add the higher purchase price and the C2 carries a hefty £531 liability.