Interior got more comforts, and air-cooled engine was used for last time in this pivotal version of 911. 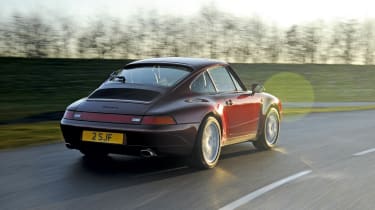 Until the late Nineties, all Porsche engines were cooled by air rather than water. This feature became a characteristic of the marque, and gave the cars a distinctive and much admired sound.

The last generation to use air-cooling was the 993, launched in 1994. But that’s not the only reason we have included it here. With wider and less rounded front wings, plus flatter headlamps, the 993 brought the biggest alteration in the 911’s shape since the original was introduced in 1964. The rear wings were broader and blended into the tail in a more direct line. All that, plus modernised detailing, gave the coupé a much more contemporary appearance. The overhaul was so radical that Porsche claimed only 20 per cent of parts were carried over from the previous generation.

Significant progress was made with the engine and handling; to tempt buyers away from Mercedes and BMW, the ride was refined and cabin noise reduced.

Yet while the 911 was more civilised, the driving experience had to remain uncompromised. So to help control the intimidating, tail-happy chassis of the outgoing model, its rear trailing arm suspension was replaced by an all-new multi-link set-up.

The result saw the 911 come of age. Quality was better than ever, with sharper handling and improved refinement. The only trouble was, by the end of 1995, it was the only car in Porsche’s line-up.

Bosses finally gave up trying to make the four-cylinder 924 and V8-powered 928 a success, so the future of Porsche rested solely on the 911’s shoulders. Had the 993 generation failed, there would have been no money to develop the Boxster – and arguably the future of the firm would have been in doubt.

But the final air-cooled 911 was a winner. A Targa variant was introduced alongside the Coupé and Cabriolet, while RS and GT2 versions kept performance fans happy. There was a choice of Tiptronic or manual transmissions, and four-wheel drive was available.

What you see here is a 1995 Carrera 2 Tiptronic S (the S referred to its steering wheel-mounted shifters). Manual models feature a six-speed box and remain the purists’ choice. However, all 993s are significant, as the car single-handedly secured Porsche’s future.

Owner profile by Tom Firman The 993 in our pictures is for sale through specialist dealer 991 Virgin. And owner Tom will be sad to see it go.

“Old cars tend to deteriorate really quickly if you use them in anger,” he says. “As the years pass, fewer decent models become available, so you need to sift through a few average ones. But the 993 is so refined, it can be used daily.”

He also reckons the air-cooled 993 gets you closer to the classic 911 feel than any later variant. The Tiptronic S model shown here is yours for £25,595.