V8 stunner is one of the world’s best supercars 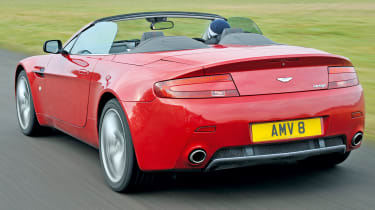 As British as Buckingham Palace, Aston Martin is one of the UK’s most prestigious brands. Of all the models in our line-up, our V8 Vantage Roadster is the one that oozes Britishness from every shutline.

Even though the company is partly owned by foreign investors and production at the Newport Pagnell factory in Bucks has halted, you only have to take a short drive to Aston’s new HQ at Gaydon, Warks, to see the DB9, DBS and V8 Vantage and Roadster taking shape. Recent revisions have given the Vantage a 4.7-litre engine and improved handling. But as a Coupé or Roadster, the baby Aston is still one of the most attractive vehicles on sale.

As with any great British sports car, though, the appeal goes deeper than the looks. Press the distinctive clear key into the dash, and the V8 barks into life. In the Roadster, its amazing, bellowing soundtrack is only magnified. The roofless Vantage’s body is stiffened enough to ensure the chassis is engaging, too.

Strong front-end grip, direct steering and great balance make it hugely capable. The standard manual box has a chunky action; the optional Sportshift offers wheel-mounted paddles. It’s not as clinical as the Porsche 911, but the Aston has a muscle car edge – plus one of the world’s most desirable badges.