Norfolk-built flier still at the top of its game 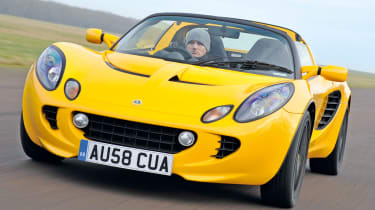 Thrilling, long-lasting and copied the world over – the Lotus Elise is the best British sports car of the modern era. When it comes to pure driving pleasure, few models match the Norfolk legend.

Built at the Hethel factory, the lightweight Elise took the market by storm on its debut in 1996. With a hi-tech extruded aluminium chassis, the roadster had a mix of agility and performance that left competitors trailing.

And despite its age, the mid-engined Lotus still runs rings around rivals. A mid-life facelift has freshened the looks, while a comfortable cabin and air-con make it a genuine daily driver.

But the Elise is at its best out of town. The direct, unassisted steering is full of feedback, while the suspension serves up strong body control in bends and a supple ride over bumps. There’s plenty of pace, too. The 1.8-litre Toyota engine offers only 134bhp, yet this base S model covers 0-60mph in 5.8 seconds. That’s down to the low 860kg kerbweight – nearly 300kg less than a Mazda MX-5!

There’s also a 189bhp Elise R and a 217bhp supercharged SC – but all return more than 30mpg. In addition, the Elise forms the basis of the track-biased Exige and 2-Eleven, as well as the more luxurious Europa coupé. Fun, fast and innovative, the Lotus remains unbeatable

For an in-depth buyer's guide on the Lotus Elise from Classic and Performance Car click here...