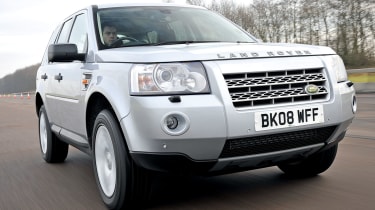 The Freelander 2 was assured of a place in our Best of British rundown. As our reigning New Car Honours champ in the compact SUV sector, the entry-level Land Rover is a big hit at Auto Express.

The original defined the sector when it debuted in 1997, and the second generation is what we now expect from the brand. It’s made at Halewood on Merseyside rather than Land Rover’s spiritual home of Solihull, W Mids.

The Freelander mixes supreme rugged ability with great on-road handling and refinement, while chunky switchgear and a classy layout make it feel like a baby Range Rover inside.

Better still, it’s now available with a fuel-saving stop-start system, with the arrival of the Freelander 2 TD4_e. This is a first for an SUV – although it’s not the only innovation the Freelander has pioneered.

For example, Hill Descent Control debuted on the original, while the latest Freelander gets Land Rover’s Terrain Response system. This tunes various settings, from throttle response to the ESP, to suit a range of conditions.

Few brands can match Land Rover’s history and prestige, and the Freelander 2 lives up to its billing as a 4WD that is as adept on tarmac as it is on the mud. There’s no need to look anywhere else for your classy compact SUV!