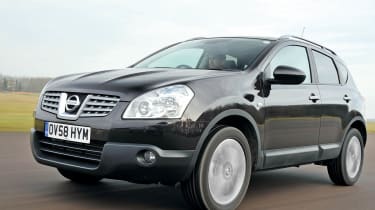 The Nissan Qashqai doesn’t play by the rules. When it first appeared in 2007, the crossover model turned the family car sector on its head.

By combining chunky SUV looks with a hatchback driving experience and running costs, the newcomer was like nothing else on the road – and proved an instant hit.

Yet what sets the Qashqai apart is that it’s almost 100 per cent British. Look past the badge and you’ll find a car that’s not only built on UK soil (at Nissan’s Sunderland plant), but was styled and engineered here, too.

The exterior looks imposing, but the model takes up no more room on the road than a VW Golf. Inside, the cabin is spacious, solid and well laid out. And the raised ride height gives drivers a commanding view of the road.

Buyers now have the option of the seven-seat Qashqai+2, with an extra row of chairs in a slightly longer, taller body. Whichever variant you choose, though, the Nissan is as capable as any hatch. Direct steering and strong grip mean it feels secure in corners, while the suspension soaks up the worst bumps.

There’s a wide range of petrol and diesel engines, and two or four-wheel drive options. So, for character, choice and versatility, few models can compete with the Qashqai.