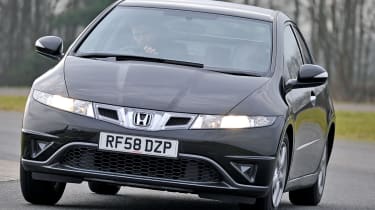 It isn’t just the best of British; until recently, the Civic was the best compact family car by far! Only the latest Volkswagen Golf knocked the futuristic Honda off the top spot, but even then it didn’t go quietly.

Built in Swindon, Wiltshire, the Civic was designed to suit European tastes – buyers in the American and Japanese markets get a sober saloon instead of the spaceship-style hatchback we know and love.

There’s plenty to recommend it, with one of the most distinctive interiors around and Honda’s famed build quality. It’s spacious, too, with its clever rear seats, which fold down or pivot up, and generous luggage bay.

On top of that, the Honda drives rings around its rivals, with sharp handling and responsive engines. And while refinement could be better, there are few other flaws. The flagship Type R provides hot hatch thrills, while a smooth and powerful diesel model will appeal to drivers focused on fuel economy. But even this entry-level 1.4-litre petrol model is hugely capable and enjoyable.

The Civic is one of the few models we would recommend whatever the spec and engine. So, no matter how much you have to spend on a family car, it deserves a look