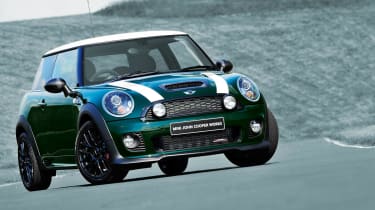 To celebrate its 50th birthday, MINI has launched a trio of special-edition models. The Mayfair and Camden go into production in August for one year only. With a host of unique trim and colour details, they will be available in Cooper, Cooper D and Cooper S guises.

But the birthday present that is sure to get enthusiasts really excited is the John Cooper Works World Championship 50.

Finished in the Cooper’s signature colour, Connaught Green, the flagship of the MINI range highlights just how far the brand has come over last 50 years.

Based on the current JCW, the Championship 50 has the same 1.6-litre 208bhp engine, but a raft of upgrades inside and out makes this a hot hatch for history fans.

With the signature of John Michael Cooper – son of the legendary John Cooper – on the right bonnet stripe, and a unique dash plaque, this MINI celebrates the Formula One title-winning Cooper Grand Prix team of 1959. A host of racy modifications means the 50 is more than just a nod to history, though. The black-painted 17-inch Challenge alloy wheels provide a menacing look, while the carbon detailing on the bonnet scoop, tailgate trim and mirror caps contrast with the green paintwork. To complete the changes, the car’s xenon headlights feature moody black reflectors.

Inside, the cabin feels special, too. The black leather seats edged in red piping are unique to the Championship 50 and nearly every option available on the standard JCW is fitted as standard.

That means luxuries such as a Harman Kardon audio system, DAB digital radio, Bluetooth, sat-nav, parking sensors and heated seats are all included.

The price of the Championship 50 has yet to be announced, but with only 250 examples being made, one thing’s for certain – it won’t be cheap. However, the cost is unlikely to stop this rare birthday car and future classic being eagerly snapped up by MINI fans.