It may have been touted as all-new, but 1967 MkII still features spartan principles of its predecessor, including sliding windows, simple door handles and a basic dash 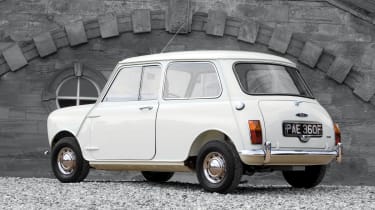 After eight years of production, during which time the British public had fallen hopelessly in love with the Mini, BMC launched the MkII.

Yet it soon became clear that most of the updates were being introduced to make it cheaper to build rather than better. Thanks to over-optimistic initial sales expectations and a complicated production system, the MkI Mini had given BMC’s balance books a battering.

So, in 1967, the MkII arrived with a new look and a new price. The grille lost its famous ‘moustache ends’, while the rear screen was enlarged and new rectangular tail-lights added. The Mini also got its first power upgrade: a 998cc A-Series engine available alongside the existing 848cc unit.

Yet although the MkII was a more refined offering that – in 998cc guise – could take the UK’s expanding motorway network in its stride, it was still effectively the same engineering marvel that had appeared eight years previously. The MkII proved another big hit with buyers, with the Mini enjoying great sales figures. While the car’s rallying exploits were on the wane by 1967, there was a growing hunger for the model around the world.

But yet again, the Mini wasn’t contributing anything to the fortunes of its maker. Not only was it still earning peanuts for BMC, many of its buyers were trading down from the firm’s existing, costlier products.

Today, though, none of that really matters. As our beautiful example shows, the classic Mini remains a timeless piece of great design. The MkII may not be the default collectors’ item that the MkI is but, as a piece of Mini history, it’s right up there.