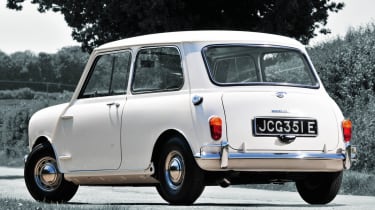 If you were to draw a family tree for the modern car market, 80 per cent of the motors would probably have a direct link to the incredible piece of automotive history you see here.

Although most of the original Mini’s celebrated engineering features had been seen before, it combined these technologies to create something genuinely groundbreaking.

Originally conceived as a short-term solution to the Suez oil crisis, the Mini was the brainchild of British Motor Corporation boss Leonard Lord. He commissioned Alec Issigonis – a maverick but hugely talented engineer – to come up with a solution.

The result became one of the 20th century’s most iconic designs – although Issigonis hated the notion of the car as a fashion item. He claimed the Mini looked the way it did because everything was functional.

Examine Mini number one, and it’s hard to argue against that view.

The famous external body seams were there because they made the car simpler to build, while the rubber cone suspension – which gave the Mini its go-kart handling – was the only set-up that fitted. The sliding windows allowed for the doors to be hollowed out for extra cabin width.

And it’s impossible not to be impressed by the interior packaging. Shorn of all luxuries – a heater was standard only on the DeLuxe – the Mini is an object lesson in how to build a car for a purpose. There’s genuinely space for four adults, while huge door bins and underseat storage can swallow vast amounts of kit.

Production continued for 41 years after Mini number one rolled off the Cowley line, and the MkI was built until 1967. The car enjoyed great highs and lows, surviving the axe on many occasions. And while other firms were soon building safer, more comfortable and faster rivals, none had the Mini’s charm or engineering brilliance. It is, quite simply, the most influential road car ever made.