Model shares the same cramped driving position as the original, and familiar Cooper badging ensures it looks the part. 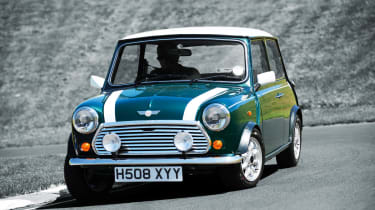 The giant-killing exploits of Mini Coopers on the world rally scene have passed into motoring folklore, but its roadgoing namesake has had a turbulent history.

After a decade of sales success, British Leyland dropped the sporty model to cut costs, because racer John Cooper was still receiving a royalty on every car. As a result, fans would have to wait until 1990 before an official Mini Cooper rolled out of Rover’s Longbridge factory.

The newcomer lacked the original’s motorsport pedigree, but it retained the same boisterous spirit – and it certainly looked the part. Its familiar cheeky lines were enhanced with an eye-catching white roof, 12-inch Minilite-style alloys and retro chrome bumpers. Owners could customise their Cooper with bonnet stripes and racy extra lights at the front.

Inside, the later model shares the original’s remarkable packaging and cramped driving position, but it was much less adventurous mechanically. As with the standard car, it featured a carburettor-fed 1,275cc engine that developed a modest 61bhp – later examples boasted fuel injection and a 2bhp power boost.

On the road, performance is limited in either version, with the dash from 0-60mph taking a leisurely 11.5 seconds, culminating in a top speed of just over 90mph. But what the Cooper lacks in pure muscle, it makes up for in driving fun.

The unassisted steering is direct and full of feedback, while the wheel-at-each-corner stance gives incredible agility. As with all Minis, the Cooper has a firm ride, bouncing energetically even on smooth surfaces. You’re also treated to the familiar whine from the four-speed gearbox and a tuneful exhaust note.

The Cooper remained a fixture in Mini price lists until the car was phased out in 2000. By then, owners could specify a costly Cooper S Works featuring modern refinements such as a 90bhp engine, five-speed box, leather trim and even an airbag.

But like the 1990 model, it retained the same lovable character that made the 1961 original such a hit.