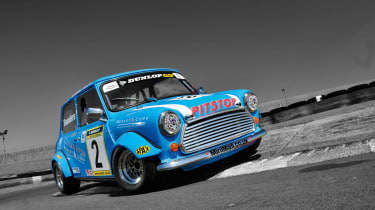 It may have been conceived as economical and affordable transport, but the Mini’s excellent handling meant it was also a hit in the world of motorsport. The rally exploits of the little Brit are legendary, and it was equally successful on the track.

Despite its tiny power output, the Mini won the British Touring Car Championship in 1961 and 1962. These giant-killing antics made it a favourite with race fans. While it was blown away by bigger cars on the straights, the Mini would out-corner its rivals, to the delight of the crowds.

The fun factor behind the wheel meant amateur competitors flocked to race Minis, too. A one-make Mini Seven Series arrived in 1966, and the more powerful Mini Miglia Series followed in 1970. Today, both these formulas continue to thrive, thanks to their winning combination of great racing and manageable running costs.

The Miglia racer appears to be no more than a sporty version of the other Minis in our line-up. But take a look inside, and the seam-welded roll cage, carbon fibre dash and modern race instruments reveal that it’s more akin to a miniature touring car than an everyday runabout.

Powered by a 1,293cc A-Series engine, it produced around 130bhp, which, allied to a tiny kerbweight of 660kg, means it can blast from 0-60mph in only 4.5 seconds. And despite having four gears, it’s still capable of a 125mph top speed.

The tiny 10-inch wheels are shod in slick Dunlop tyres and sit proud of the bodywork, while bulging plastic wheelarches cover them. And with its ultra-stiff suspension and low ride height, the taut Miglia hops around, carrying huge speed through corners.

The distinctive whine of the straight-cut gears is a famous racing Mini trait, and meant our stunning blue Miglia sounded great as it lapped the track for these pictures.