With comfortable, well equipped cabin, 2001 car is a world away from original, although its retro styling both inside and out remains faithful to forebear. 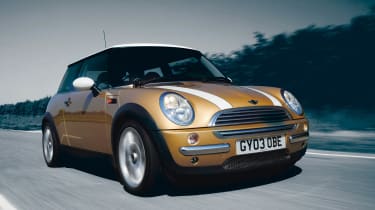 Few brands, if any, command the loyalty and enthusiasm that the Mini generates in its followers, so relaunching the classic model was a massive undertaking. The job of coming up with a Mini for the 21st century wasn’t taken lightly, and new owner BMW considered a host of designs for its long-awaited comeback – from clever space-saving models in the spirit of the original to retro reworkings of the existing vehicle.

Take one look at the end product and it’s clear which approach the firm preferred – and the resulting sales hit shows it got things right. With cute looks, a unique cabin, sharp dynamics and a premium price tag, the MINI was a car without a rival – and an instant success.

The savvy marketing campaign provided a huge list of cosmetic extras which were inspired by classic Mini features. This gave buyers the chance to make a real individual statement by choosing everything from Union Flag roof decals to bigger wheels and upgraded interior trim, just to give their car a personal touch. This approach has been copied by rival firms ever since, but the MINI got there first.

With its zippy engines, powerful Cooper and supercharged Cooper S models, as well as an economical diesel variant, there was a MINI for every occasion – but the newcomer wasn’t without compromise. Not only did it look like its famous predecessor, it shared the cosy rear seats and tiny boot.

Innovative aftermarket add-ons such as a clever and affordable all-inclusive servicing package set the MINI apart from its peers and helped to establish the brand’s now market-leading residual values.

That explains why even the cheapest, earliest examples will still set you back £3,500 today.

The rebirth wasn’t universally popular with diehard Mini fans, but without the incredible showroom success of the 2001 car, models such as the later JCW, Clubman and Cabriolet wouldn’t even exist. The Oxford-built hatchback was also responsible for introducing a whole new generation of buyers to the Mini legend, which explains why this machine is the highest-ranked modern car in our rundown.