Minimalist, Colour-coded interior and dependable if diminutive engine give estate all the charm of the standard mini, but Traveller’s larger boot and barn-style rear doors ensure added practicality and versatility. 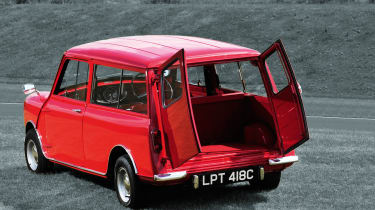 In the early Sixties, the idea of a trendy lifestyle estate was decades away, so this Mini was ahead of its time. It was designed to provide more practicality than the existing two-door models, and hit the roads in 1960.

Built on a slightly longer chassis – 2,104mm compared to 2,040mm – the Austin Mini Countryman and Morris Mini Traveller both featured a pair of barn-style rear doors, as well as more boot space than in the conventional car.

The beautifully restored example seen here was a joy to drive, and a quick look in the rear view mirror out through the back doors leaves you in no doubt as to the inspiration for BMW’s modern-day Clubman. With its light steering, the Traveller feels just like the saloon from behind the wheel, and it was this ability to provide extra space without ruining the driving experience that made the model such a hit.

Some luxury variants even got external wood panelling to give them the look of the ‘woodie’ estates of the Fifties. By the time production stopped in 1969, more than 200,000 examples had been

sold overall. Even more popular was the Mini van. In essence it was a Traveller without the side windows, and it was a big success. When the curtain fell on sales in 1982, more than half-a-million had been shifted. Even so, it is the fun of the Traveller and Countryman that lives on today in the form of the MINI Clubman.