Monte Carlo Cooper was specially kitted out for endurance rallying, and boasts additional dials and controls. It still wears competition stickers with pride. 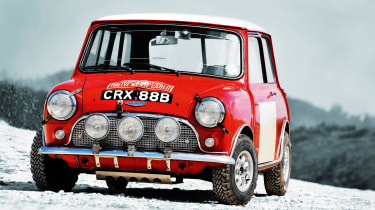 It’s fair to say the Mini Cooper – which won the hearts of millions of driving enthusiasts the world over – was never part of the plan. BMC created the Mini as a cheap-to-run family car. Nothing more, nothing less.

However, sales were initially slow, and when Grand Prix-winning team owner John Cooper told BMC bosses the model had the potential to be a great competition car, they jumped at the chance to broaden its appeal.

Working closely with Alec Issigonis, who was lukewarm on the idea of his urban runabout being converted into a performance car, Cooper created a faster, more agile Mini. Originally fitted with a 997cc engine – 147cc more than standard – the MkI Cooper also featured the world’s smallest disc brakes, which were developed by aircraft maker Lockheed.

Launched in 1961, the Cooper was pressed into competition action virtually immediately. But while it recorded some decent results, it was not an instant hit with BMC’s older driving stars. Many regarded it as a punishment, often pleading with the management to let them pilot the firm’s ageing Austin Healeys instead. All that changed in 1964, when young Irish hot-shot Paddy Hopkirk swept to victory in the Monte Carlo rally driving a 1,071cc Cooper S. This was the world’s most prestigious motorsport event, and the win transformed the Mini’s image overnight.

After the 1,071cc Cooper S came an even faster version – the 1,275cc S seen here. This particular car was built for ‘Flying Finn’ Rauno Aaltonen and was part of a six-car assault on the 1965 Monte Carlo. Although BMC emerged victorious, with Timo Makinen recording the Mini’s second straight victory, CRX 88B retired early on. Compared with today’s rally cars, the Cooper S is very basic, and the rudimentary roll cage and thin safety belts prove how brave the likes of Hopkirk, Aaltonen and Makinen were.

Just as the original Mini created the template for the modern small car, the Cooper S did the same for the hot hatch as we know it. Volkswagen and Peugeot may get credit for turning GTIs into money-spinners, but if you’re looking for the model that started it all – this is it.