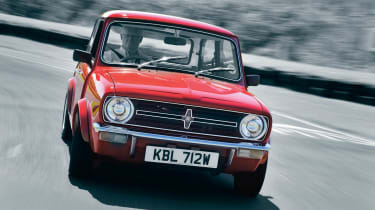 Fans of fast Minis were in for a shock when the wraps were pulled off the 1275 GT in 1969. Designed to replace the much loved Cooper, the racy newcomer was the first model to feature the controversial Clubman body styling.

Walk up to the GT and it’s easy to see why buyers were put off. With its boxy nose treatment, the Clubman certainly lacks the charming and cheeky looks of the original car. But glance past its ungainly face and you’ll find it carries even more sporty cues than the famous Cooper. The flanks have distinctive stripes with eye-catching 1275 GT graphics, while 12-inch alloys were an option – early cars had smaller 10-inch rims.

The new body also featured a number of useful refinements which were soon adopted by the rest of the line-up, including the removal of the old-fashioned external door hinges. Better still, wind-up windows replaced the fiddly sliding items that had been a fixture since the Mini made its debut in 1959.

Inside, you’ll find even more updates to the Mini template. The standard car’s trademark central speedo was replaced by a three-dial binnacle in front of the driver, and two ‘eyeball’ vents at either end of the dash provided much improved ventilation. While the 1275 GT was more luxurious than the early cars, it still feels basic by modern standards, and the quirky sit-up-and-beg driving position remains the same.

Thankfully, the changes made to the Clubman failed to dilute the Mini’s ability to serve up bags of driving fun. The 1,275cc engine delivers a mere 59bhp, but thanks to a sharp throttle and short gearing the GT feels eager on the move. Dynamically the car seems alert, responding instantly to the steering wheel and slicing accurately through bends with undiminished speed. Only the unassisted disc brakes highlight the model’s age, because the pedal needs a hefty shove before you begin to slow.

When the Clubman was new, it failed to convince enthusiasts and was discontinued after 11 years. Today, though, the underrated GT would make a desirable addition to any Mini fan’s garage.