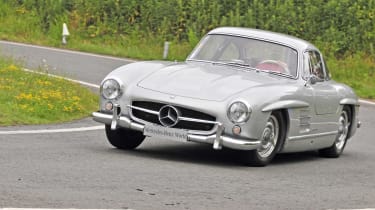 Once in a while, a car comes along that gains legendary status before it has even turned a wheel – and this is certainly the case with the Mercedes 300SL. As soon as its amazing gullwing doors swung open at the 1954 New York Motor Show, the coupé’s place in history was assured.

Developed from the firm’s 1952 Le Mans-winning Sport Leicht (Sport Light) racer, the beautiful roadgoing model was packed with cutting-edge technology and novel engineering that instantly made rivals look old-fashioned. Its powerful 3.0-litre straight-six engine was the first to be fitted with direct injection, while its low-slung body was styled to be as aerodynamic as possible.

The result was a 160mph top speed, which earned it the prestigious accolade of “fastest production car in the world”. Take a look at the SL today and it’s amazing to think the design is nearly 60 years old. It’s clear that the original has influenced the lines of the new SLS. Both machines share the same long and low nose, a wide grille with prominent three-pointed star and a gracefully rounded rear end. However, where the newcomer is brash and brutal, the 300 is delightfully delicate. Visual highlights include the subtle power bulges in the bonnet, the eye-catching chrome detailing and its distinctive wheelarch flares.

Pull on the beautifully crafted, one-piece alloy handle and the SL’s gullwing door rises effortlessly. As with the new car it’s an operation that manages to stop passers-by in their tracks.

Climb over the wide sill – which hides part of the car’s intricate spaceframe chassis – and you’re confronted with an interior that’s dripping with Fifties style and sophistication. Soft red leather covers much of the cabin, while the dashboard gets the same silver finish as the exterior. In front of the driver is a huge, cream-coloured wheel and a large number of dials that monitor the likes of engine oil temperature and pressure – even the health of the battery.

Elsewhere, you’ll spot loads of gorgeous period details such as the Becker radio, chrome slider controls for the heating and a dash-top rear view mirror.

Prod the small silver starter button mounted behind the steering wheel, and the Merc’s straight-six coughs into life before settling into a rough idle. Once warmed up, the 3.0-litre unit delivers strong pace and pulls hard from low revs. But it’s the soundtrack that makes the biggest impression, thanks to an exhaust note which mixes thoroughbred racing car with World War II fighter plane.

Sadly, while the Gullwing’s performance is a match for many modern sports cars, its chassis is rooted in the past. Even when new the Merc had a reputation for knife-edge handling – and the passing of time has done little to improve matters. The main culprit of the car’s wayward behaviour is the antiquated swing-axle rear suspension, which can induce savage spins if you lift off the throttle mid-corner. Heavy steering, weak drum brakes and a long-throw gearshift further undermine the SL’s driving dynamics.

Despite these failings, a drive in the 300SL is an intoxicating experience. The sights, smells and sounds all combine to create an incredible sense of occasion that modern supercars struggle to match. Add in the sensational looks and it’s not hard to see why the Gullwing has earned its place in the motoring hall of fame.

WHY: Motoring legends don’t come any bigger than the original 300SL. Its gullwing configuration and electric pace made it an instant hit in the Fifties.