Unique looks and a great drive form a thrilling package. 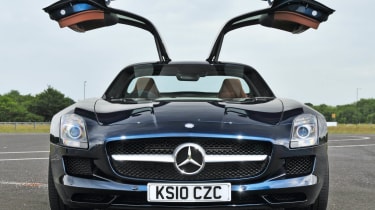 Jaw-dropping looks are the first requirement of any supercar, and the new SLS doesn’t disappoint. It’s already a familiar sight thanks to numerous show appearances and its role as the official F1 safety car, but that hasn’t dulled the impact it makes when you see one right there in front of you.

The low-slung Merc has a long nose, giving the new gullwing a cartoon-like quality. Retro details abound, with air vents on the bonnet and front wings punctuated by silver strakes, which have been borrowed directly from the original 300SL.

Its face is clearly inspired by the Fifties legend, too, and the sleek headlamps and thrusting grille have an unmistakable presence. The SLS is guaranteed to stand out from even the most exotic mid-engined rival, and it strikes a well judged balance between retro charm and cutting-edge appeal. Then, when you unlock it, the flush-fitting handles for the doors emerge from the bodywork to provide the car’s biggest talking point.

A simple tug is enough to theatrically raise each of the doors, transforming the SLS from a car which merits attention into one that demands it. Climbing in is simply a matter of squeezing past the throng of people that invariably surround it, and sliding over the chunky sill down into the cabin. Closing the doors requires a short reach up from the seat to grasp the handle and pull them down manually.

The cabin is generously equipped and has a high-quality feel. The familiar Mercedes switchgear is mixed with unique touches, such as the quartet of alloy-trimmed rotary air vents which help to set the SLS apart from the firm’s usual fare.

A wide transmission tunnel is home to an aircraft-inspired gear selector plus a row of buttons and dials to control the stability systems and gearbox settings. Firing up the keyless SLS requires a press of the glowing red starter. It flickers as the eight cylinders crank into life and settle down to a bassy idle.

The 6.2-litre powerplant is at the heart of the SLS experience. Even when driven gently, with the seven-speed dual-clutch gearbox in its auto setting, you’re treated to an unmistakable V8 rumble. And as you lift off the throttle the exhaust emits a satisfying symphony of pops and bangs which are guaranteed to put a grin on your face.

Switch the gearbox past its Sport and Sport+ settings into manual mode, and you can experience the full AMG soundtrack – and few cars at any price sound as purposeful and threatening as the SLS at full tilt. Unfortunately, you’ll be able to enjoy its full voice only in short bursts on public roads, because it’s as savagely fast as it sounds.

At the test track, it blasted from 0-60mph in 4.1 seconds and strode to 100mph faster than many so-called hot hatches reach 60mph. It demolished our in-gear tests, too, and blitzed from 30-70mph through the gears in a startling 3.1 seconds.

The SLS is about more than simply an engine. Arrowing its long nose into a corner for the first time reveals sharp responses and genuine poise. The steering is light yet communicative, and the huge tyres generate ample amounts of grip.

Better still, the SLS never feels intimidating to drive – the upright windscreen and decent visibility help make light work of placing the Merc’s long nose. At low speeds, the firm suspension thumps into potholes and you feel even small bumps, but the trade-off at higher speeds is tight body control and alert responses.

With 563bhp and 650Nm of torque under your right foot, though, it’s easy to break traction and light up the rear tyres. Mercedes has devised a three- stage ESP set-up with a Sports setting, but you still need quick reactions to catch the stubby tail when the system is disengaged.

Reinventing a legend is fraught with difficulties and it’s all too easy for the end product to be compromised by its need to look like a car from another era. That’s not the fate of the SLS.

Its unique styling, thunderous engine and epic performance make it a worthy successor to the original Gullwing.

WHY: After Mercedes’ years in the supercar doldrums, the brand’s latest flagship aims to mix it with the most exotic cars on the planet. Does the newcomer succeed?