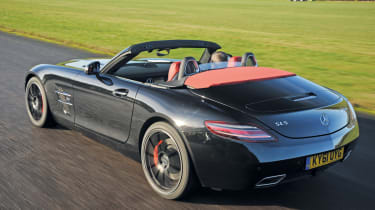 10
You only need to take one look at the Mercedes SLS AMG Roadster to see that doing away with the gullwing doors hasn’t ruined the car’s styling.
The convertible version was designed in parallel with the coupe, and looks every bit as special. The long bonnet, wide stance, large wheels and sloping tail mean the proportions are spot-on, while the fabric roof is smartly incorporated into the overall design.
Better still, the taut triple-layer hood folds down in only 11 seconds, without reducing boot space, to reveal a cabin that’s identical to the coupe’s.
The low-slung driving position is great, the Alcantara-trimmed wheel and metal gearshift paddles are lovely to hold and use, plus there’s a huge range of personalisation options to help make the car your own. However, the fact that most of the Roadster’s switchgear is sourced from more mundane Mercedes models takes the edge off the car’s exclusivity.
Yet any little twinge of disappointment or sense that it isn’t special enough is extinguished the second you press the starter and hear the mighty 6.2-litre V8 burst into life. Few engines feel as raucous as this hand-built 563bhp monster, but its power delivery is linear and smooth.
It’s mated to a great seven-speed dual-clutch transmission, and the whole drivetrain feels superbly engineered. There are three automatic modes, and gearshifts are super-smooth in all of them. In Comfort mode, early upshifts allow you to use the torque to make relaxed progress around town.
But when you head for the open road, you’ll want to skip the sportier auto settings and head straight for manual, where the wheel-mounted paddles deliver near-seamless upshifts. What’s more, each downshift is accompanied by a razor-sharp, perfectly timed throttle blip. Even better, each time you lift off, the exhaust burbles like a distant rumble of thunder, which sounds incredible with the roof down.
You need to keep an eye on the speedometer, though, as the seemingly never-ending wave of effortless torque means the SLS builds speed alarmingly quickly, especially as it comes into its stride above 5,000rpm.
It doesn’t have the instant surge of the 911 Turbo – the Porsche was faster at the test track – yet it’s worth mentioning that the Roadster’s performance figures and stopping distances were compromised slightly by our test car’s winter tyres.
Nonetheless, it still blasted from 0-60mph in 4.2 seconds, which is only a tenth slower than our figure for the coupe. This isn’t surprising, because despite comprehensive bodyshell strengthening, the Roadster is only 40kg heavier than the hard-top. Impressively, chassis rigidity has been retained – there’s no shake around the screen and the car feels very stiff. It’s dynamically indistinguishable from the coupe. The steering is light, but has a very positive feel, and you can sense that the engine is mounted well behind the front axle.
Despite all this, when the SLS is driven back-to-back with the smaller, more agile, four-wheel-drive Porsche, it feels like a muscle car, not a precision instrument. The nose rises up under hard acceleration and there’s more front-to-back weight transfer than in the 911.
On wet roads, the rear squirms for grip more than the four-wheel-drive Porsche’s and the traction control cuts in aggressively. Sport mode allows more freedom, but exploring handling limits with the system off is best kept for the track.
Body control is excellent, and while the winter tyres take the edge off the Roadster’s responses,  it still inspires confidence. It’s also a better cruiser than the 911. Both cars have a firm ride, but with the well insulated roof up, there’s a lot less road noise in the Mercedes. With the hood down, the standard AirScarf system warms your neck; and there’s minimal wind buffeting.
Like the coupe, the Roadster is an accomplished all-rounder, and whichever roof you choose, this is the best performance car Mercedes has made for years.
It’s eye-wateringly expensive and has limited interior space, but the engine noise, sense of occasion and breathtaking performance mean the SLS AMG Roadster makes you feel special every time you get behind the wheel.

Chart position: 1WHY: Roadsters don’t get much more exclusive than the SLS. With or without gullwing doors, this Mercedes turns heads.