Outgoing version of classic model still impresses – so can it beat SLS? 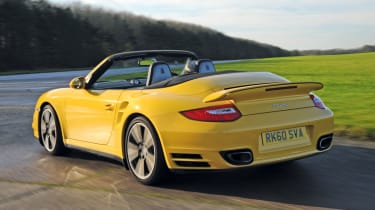 10
The 911 Turbo has been one of the world’s fastest open-top sports cars for decades. it combines wind-in-the-hair motoring with scintillating performance and certainly has the pace to rival the SLS.
But roadsters are a style-led purchase, and here the Porsche has a tougher battle on its hands. The Turbo is muscular rather than pretty, so isn’t as discreet as lesser models, and its gaping air intakes, twin exhausts and large rear wing won’t be to everyone’s taste. Plus, in cabriolet form, the bulge on the rear deck needed to store the roof gives the 911 a slightly hunch-backed appearance from the side.
There’s also no escaping the fact that when it comes to hotel valet parking kudos, the admittedly much pricier SLS has more appeal. It’s a similar story inside, as the 911’s cabin isn’t as glitzy as its rival’s. However, it’s solidly built and thoughtfully laid out. Porsche’s quality switchgear, an excellent driving position and the classic five-dial instrument pod all make it special, and you immediately feel at one with the car.
So it’s a shame that pictures of the new cabin in the next 911 cabrio, due in March, make the current model’s interior look old-fashioned. That’s not likely to be playing on your mind once you’re moving, though, as the only sensation registering then will be astonishment at how fast this car is. While you don’t get the rumbling soundtrack of the Mercedes’ V8, the 3.8-litre, six-cylinder Porsche features twin turbochargers. With the optional Sport Chrono overboost fitted, it pumps out an SLS-topping 700Nm of torque, which arrives at only 1,950rpm.
Unsurprisingly, this makes the 911 Turbo so fast that you have to readjust your senses. The turbos spool in an instant, you can hear air being sucked into the side vents, then you’re propelled forward by a ferocious wave of power. Yet four-wheel-drive traction means the Turbo feels incredibly stable, and it achieves seriously high speeds with ease. This is a car that requires plenty of self-control on public roads.
On the track, helped by launch control, the 911 Turbo rocketed from 0-60mph in 3.1 seconds and out-gunned the SLS in all of our in-gear tests. As you’d expect from Porsche, the chassis is a match for the performance.
Traction is amazing, body control is flawless and the brakes are powerful. The weighty steering has razor-sharp turn-in and the grip levels are astonishing. The 911 is lighter, smaller and more agile than the SLS, and reacts to driver inputs with more enthusiasm, yet the standard adaptive dampers mean the ride isn’t too uncomfortable.
The optional dual-clutch box changes rapidly, although the optional sports steering wheel (£281) is essential, as it has logical paddles rather than the confusing standard-fit shift buttons.
As with the SLS, body rigidity is very impressive and the roof is well insulated, but there’s more road noise on the motorway and a little more buffeting with the hood down. Even so, the 911 Turbo’s blend of supercar performance and everyday usability is hard to fault.

Chart position: 2WHY: The 911 Turbo has set the standard in this class for years. But can it measure up to the newer and pricier SLS AMG?