New Citroen 19_19 Concept: driving the autonomous lounge of the future 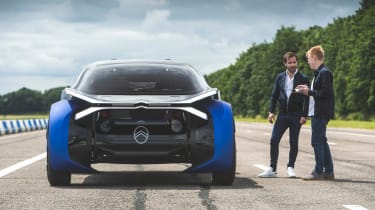 The Citroen 19_19 was unveiled alongside the AMI-One city car concept at the 2019 Geneva Motor Show but while Citroen bosses are beginning to open up about plans to create something like AMI One, the 19_19 remains firmly in concept territory.

That’s not to say Citroen doesn’t have a vision for it; instead of offering cheap, urban transport, the aircraft-inspired 19_19 is intended to take people out of the city, as a long-range, autonomous lounge. Don’t expect anything like this to appear next to you on the motorway for 15 years at the very least.

• New Citroen AMI One concept revives spirit of the 2CV

For now, the experience of driving the concept is similar to its smaller sibling (left) and we had to be careful, given the lack of stopping power. We managed to get 28mph out of the 19_19 – although the concept’s fantasy specs stipulate a top speed of 124mph, 0-62mph in five seconds and an all-electric range of 497 miles. 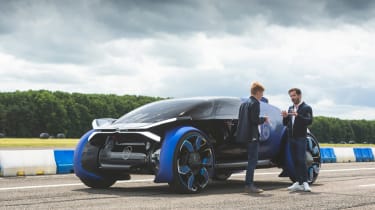 With autonomous duties in mind, the design of the interior takes precedence over the outlandish, 30-inch-wheeled exterior. In the passenger seat for our ride this time is Citroen’s head of interior design, Jean-Arthur Madelaine, who explains that comfort is the ultimate message Citroen wants to convey with the 19_19, and why the two front seats are different. “Everyone has their own experience in the car,” Madelaine says. “It’s a bit like your living room at home. You don’t have six of the same seats; you have different ones for different experiences.”

Madelaine explains that there are elements he wants to bring to Citroens we’ll see shortly. “Like getting rid of all the complexity,” he says. “No dash, just kind of a wing. It’s super-simple.”

The Citroen 19_19 Concept is an outlandish celebration of the company’s centenary but one that showcases where the French brand may take future treatments of branding and interior finishes.

At 4,655mm long, the 19_19 is about the same length as a Peugeot 5008 - but despite its rakish roofline, it’s about as tall as Citroen’s current family SUV, the C5 Aircross. The car’s design was inspired by aircraft - most notably the Citroen RE-2 helicopter that the company developed in the seventies but declined to put into series production. 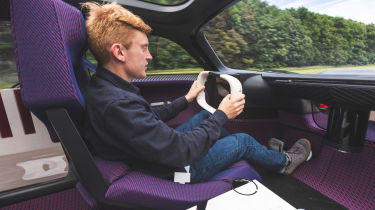 As such, the 19_19’s cabin sits apart from its wheels - which are colossal 255/30 R30 Goodyear items on alloys that feature a fixed central hub. The wheels and their arches move independently of the body - a trait that the car celebrates by having markers above the rear wheels, allowing passers-by to see how the suspension is being utilised on poorer surfaces.

The car also lacks a conventional front and rear treatments, with no bumpers to speak off and ‘exposed’ axles that house its pair of electric motors. There are a number of visible sensors to aid both autonomous functions and, Citroen says, the suspension system’s ability to ‘pre-read’ the road conditions ahead of the vehicle.

As a result, the ends of the vehicle are dominated by strong full-width LED light modules that showcase the Citroen logo - although lower down, the front does also feature a metallic version of the original badge used by Andre Citroen when he changed his arms company into a car manufacturer back in 1919. The rear of the car does also feature a concave screen - a nod to previous Citroen models like the Ami 6, CX and C6.

The pure-electric vehicle is fuelled by a 100kWh battery pack and its dual motors produce a combined 340kW (456bhp) and 800Nm of torque - enough, Citroen says, for a theoretical top speed of 124mph and a 0-62mph of five seconds. The 19_19 could travel up to 800km (497 miles) between recharges, under the WLTP testing regime, the company claims - and it also features induction charging capability to allow it to replenish its batteries while driving along a suitably equipped stretch of road. 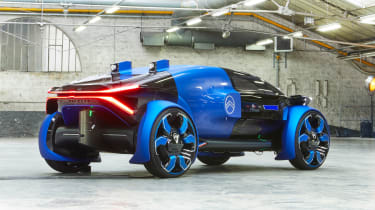 The 19_19’s radical approach continues inside, where it features three types of seat - each offering the occupant a different experience. The driver’s seat looks the most focused, with a mixture of plush fabrics and exposed structure. The front passenger gets a chaise longue that wouldn’t look out of place in a luxurious Paris apartment. “We were influenced by French furniture,” interior designer Jeremy Lebonnois told us, “and we wanted a seat that you could put into a house and it wouldn’t be immediately evident that it came from a car.”

In the rear, there’s a two-seat sofa that has a thickly padded base and, as its back, a lattice of taut cables whose design plays on Citroen’s double-chevron logo. The strings are flexible enough to in theory allow people to reach through them and retrieve items from the boot area.

In another reference to home furnishing, the cabin features central storage areas and door trim made from a resin compound that has the appearance of marble. “The real material would be far too heavy for a vehicle,” Lebonnois says, “but the resin allows us to have a very similar appearance.” It’s clearly more workable than marble too, because it allows subtle Citroen engraved branding as well as larger, crisp double-chevron slashes in the centre tunnel box that could be used to store a tablet PC.

There’s enough space in the cabin, Citroen says, for the driver to be able to put the car into autonomous mode and then move from the left-hand seat into the chaise longue, or even to climb into the rear lounge area. Switching to autonomous mode would also activate one of the dashboard’s standout features - a voice-controlled AI assistant, ‘Hello Citroen’, which hangs below the fascia when the driver is at the controls, but then slides up through the console to stand proud of it when the car is driving itself. 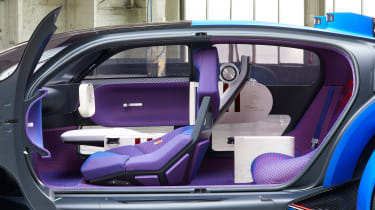 The dash is completed by a head-up display with augmented reality features, and a lower projection system that could show infotainment, such as movies, on an internal screen that allows light through from the front of the vehicle.

The car was conceived by Citroen designer Romain Gauvin, who won an internal competition within the styling team to come up with the idea of a car to celebrate Citroen’s anniversary while looking forward to future possibilities. “It all happened quite quickly,” he told us. “I’m a big fan of engineering myself, and the quality of engineering at Citroen over the years was very inspiring for me. That’s partly why we decided to show so much of the technology, instead of hiding it under bodywork.”

Although the 19_19 was not created alongside the AMI One, the urban concept shown at the Geneva show back in March, it is designed to complement the smaller show car by offering longer-distance ability and focusing on comfort instead of affordability and mobility services.

At present the 19_19 is pure concept, although the front light treatment draws on previous show cars, the AMI One and the CXperience, and insiders suggest that it could find its way onto future models, perhaps starting with the forthcoming flagship saloon that’s likely to appear by 2021.

What do you think of Citroen's 19_19 Concept? Let us know your thoughts below...

Plans for a halo Citroen saloon are accelerating, as the brand readies for a possible reveal at the 2021 Shanghai Motor Show
Visit New all-electric Citroen Ami city car revealed

The electric Citroen Ami city car has a range of up to 44 miles, and can be driven by 14-year-olds without a driving license
Visit Citroen ami ride review