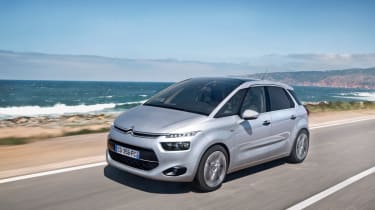 The new Citroen C4 Picasso has the silhouette more of a hatchback than an MPV, and serves up the desirability the old car was always missing. Plus, when you delve deeper, you find a seriously practical and fuel-efficient compact people carrier with an impressively polished driving experience.

If the Nissan Juke and Range Rover Evoque are anything to go by, bold styling equals big sales – which explains why Citroen has given its all-new C4 Picasso MPV an eye-catching look. Plus, the brand says its abilities are more than skin deep – so we hit the road in the predicted best seller, the e-HDi 115, to test the claims.

In terms of style, the Picasso sets a new standard in its class. Slim daytime running lights sit at either end of Citroen’s extended double-chevron grille, and while the car is a bit more squat overall, at 40mm shorter and 40mm lower, it’s just as wide as before. And Citroen says the 57mm longer wheelbase provides the newcomer with even more space.

As soon as you climb aboard, the clever packaging is obvious, with the cabin feeling more open than the previous Picasso’s. And adding to the more practical feel is an increase in boot capacity, from 500 litres to a class-leading 537 litres. Slide the rear seats forward and this goes up to 630 litres.

It’s useful to note that all three rear seats are the same size. This is ideal for parents with three child seats, but also allows three tall adults to sit in the back comfortably. Plus, each seat folds flat into the floor individually, expanding the total luggage area to 1,709 litres. If that’s still not enough space for you, Citroen will release a larger seven-seat C4 Grand Picasso, with an equally striking design and horse-shoe tail-lights.

The regular Picasso’s cabin is just as stylish as the exterior, with premium touches like the seven-inch touchscreen and huge panoramic windscreen. Top-spec models also get a large 12-inch colour screen mounted on top of the dash, while basic versions have a simple digital readout.

Under the skin is PSA Peugeot Citroen’s new EMP2 platform, and it helps the car tip the scales at 140kg less than its predecessor. The platform also promises better handling, refinement and ride comfort – and the good news for MPV buyers is that it certainly delivers on ride and refinement.

The car smooths out bumps and potholes subtly, without the body bouncing around too much, while wind, road and tyre noise are all kept impressively at bay. The handling is a big step forward over the old model, too. This car feels a lot lighter on its feet, and the steering is more reactive and communicative than ever before.

Most noticeable is the way the C4 Picasso’s body no longer rolls through corners; now it stays much more upright. However, if you want the sharpest drive in this class, a Ford C-MAX is still the better choice.

The diesel engine delivers 113bhp and is a reasonably punchy performer, with 0-62mph taking 11.8 seconds. Despite the new, lower kerbweight, we’d avoid the 89bhp e-HDi diesel – depending on which options you pick, the 0-62mph time can be as slow as 15.3 seconds. This model’s 74.3mpg economy is a big draw, but even our 113bhp version still manages a seriously impressive 70.6mpg, and also emits just 105g/km of CO2.