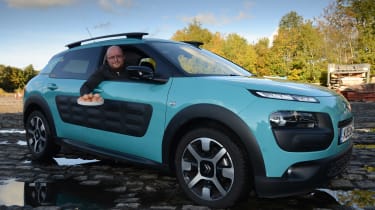 You can see some of the 2CV’s DNA in the C4 Cactus, especially in the modern car’s simple, fuss-free design and comfortable ride. However, Citroen has managed to give the newcomer a character all of its own, and that’s no bad thing in such a crowded new car market.

Auto Express’s first impressions of the C4 Cactus concept in 2013 were that the car “draws on the comfort and simplicity of the 2CV”. And after nearly 10,000 miles in the production C4 Cactus we’re running on our fleet, it’s clear this Citroen and the 2CV are closer than you might think.

To find out how close, we replicated the famous ‘egg test’ – one of a number of tough assessments the 2CV was put through by Citroen bosses back in the forties. 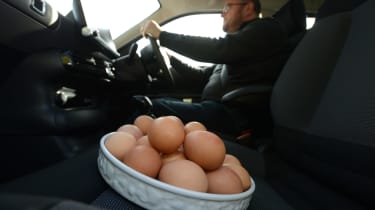 Top brass at the company not only demanded that the car be capable of carrying four people at 31mph-plus and returning over 78mpg – and incidentally, we know our Cactus can do 117mph, seat five and, if you choose a diesel, theoretically achieve 80mpg.

But in the egg test, the 2CV had to drive across a ploughed field carrying a basket of eggs without breaking a single one. Even today, this remains one of the fiercest tests faced by chassis engineers. Which is why I found myself at an ex-military vehicle testing ground, facing half-a-mile of rumble strips constructed of kerbstones to see if the C4 Cactus could emulate its ancestor.

With 21 eggs in a small dish, I hit the strips – slowly at first over the smaller bumps, but increasing my speed. While each bump was small – 5-7cm – and I didn’t exceed 15mph, this isn’t something I’m in a rush to repeat, particularly as some of the bumps were offset and bounced the car from side to side. But vicious as the test was, not a single egg broke, which is testament to the Cactus’s smooth suspension. Mission accomplished. 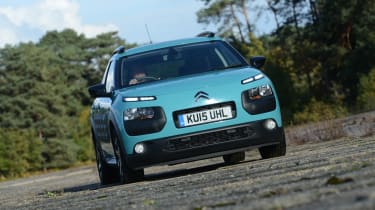 What the test also revealed is how solid the cabin is. Citroen is clearly delivering on its aim to build better-quality cars, as there were few rattles, even over the biggest bumps. Plus, the raised ride height meant getting on and off the course was easy, too.

Much of the Cactus’ 2CV-style simplicity gets a thumbs-up from me, such as the pop-out rear windows that echo the 2CV’s flip-up front side glass. Yet some features cause frustrations. Recent trips to DIY stores have required the rear seat to be folded, but the one-piece bench limits the potential to make snap purchases with a back passenger.

That’s a pity, as elsewhere the Cactus oozes 2CV goodness. The dash is straightforward – just a speedo, fuel gauge and a few warning lights – and the seats are unusually wide. Whether it’d be as easy to fix this model at the roadside remains to be seen – as it nears 10,000 miles, it’s been entirely fault-free. 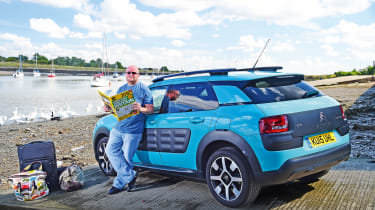 It’s been a long time since I had the chance to go on holiday. Getting married, having a baby and moving house all within four years meant that time has been tight – and money even tighter. Cue the British summertime, with the prospect of some good weather and a comfortable and spacious car to take the family away in.

So, the long-awaited journey from East Anglia to the West Country began in earnest one morning. Our Citroen C4 Cactus’ boot was loaded (to the gunnels), and although I’d already checked out the route on a map, the hotel in Devon was programmed into the sat-nav and the petrol tank was full as we departed.

For the next 250 miles, the Cactus ran faultlessly, which is more than can be said for the A303. Up until we hit the congested A-road, the car’s trip computer had been recording an easy 55mpg. Yet the stop-start traffic played havoc on a run I was hoping to return a good 60mpg from.

Nevertheless, economy wasn’t my main concern. That was reserved for my two-year-old daughter in the back. It was, by some margin, the longest journey we’d attempted since her arrival, and my wife and I had no idea how she’d take to being strapped into her child seat for so long. Fortunately, we needn’t have worried. 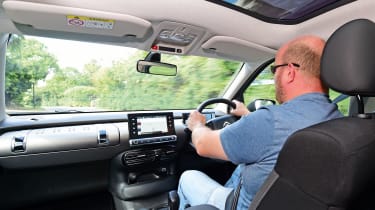 Thanks to the Cactus’ large side windows and the optional panoramic sunroof, there’s never a sense of being cooped up when you’re sitting in the rear – which you can’t say about all mid-sized hatchbacks. And those big rear door pockets are great for carrying toys, drinks and other bits.

I also had a slight reservation about the squidgy driver’s seat. Previous long journeys, including a hellish four-hour, 45-mile drive into our central London office, left me with back pain in the following days. There was no such trouble on a long motorway run, though. Besides, I’m pretty sure my aching back was due to having to twist my body slightly to continually engage and release the clutch pedal due to it being mounted too high for my driving position. 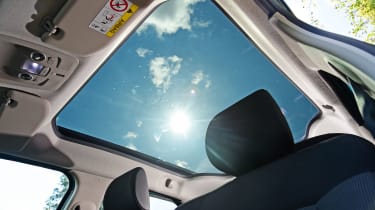 Once we arrived in Devon, the Cactus was a delight: comfortable, economical and providing good visibility. With a 500-mile return trip in addition to more than 300 miles of touring, the Cactus drank just under two tanks of petrol, which is pretty good going given the mix of driving.

It’s hard to say whether those unique Airbumps around the Citroen have deflected any carelessly opened doors or runaway shopping trolleys, but the doors are still free from parking dings despite the amount of time that the C4 spent in car parks during our trip. 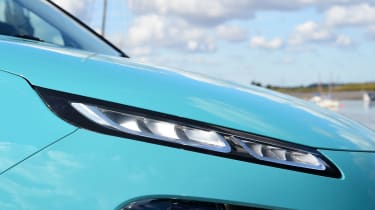 The journey also highlighted two other Cactus plus points. Although the panoramic sunroof doesn’t have a sliding cover to help keep the car cool, it is insulated. The Citroen was parked in direct sunlight for long periods, yet the glass coating made the car no hotter than if it had a metal roof. Plus, the lack of a CD player meant the holiday was entirely free from the soundtrack of Disney’s Frozen. Result. 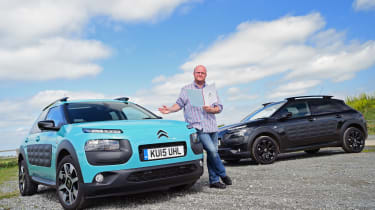 It might have only been on sale for a few months, but the roads seem full of Citroen C4 Cactuses. That’s probably got something to do with the car’s styling because, let’s be honest, you’re not going to mistake it for anything else.

Although it’s subjective, I think the Blue Lagoon paint is the best colour option and £250 well spent. For me, the radical styling deserves loud paint, although the number of monochrome Cactuses I’ve seen suggests I’m in the minority. All-black cars or silver ones with grey Airbumps look surprisingly conservative. Citroen says 18 per cent of models are black, making it the single most popular colour, while almost a third are various shades of silver or grey. Just 6.6 per cent of buyers opt for Blue Lagoon. 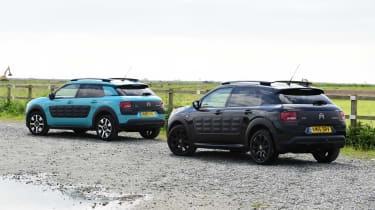 It’s certainly been a talking point, often sparking conversations in supermarket car parks and petrol stations. Reaction has been almost universally positive, although it does elicit the odd sneer from passing motorists in far more conventionally styled cars.

It’s harder to argue about the design of the interior. It’s cleverly thought out to maximise space, and decluttering the cabin makes for a surprisingly relaxing time behind the wheel. I’m not entirely sold on the concept of a touchscreen, mainly because of the time you spend looking away from the road for virtual buttons, which could be fumbled for if they were physically present. And the system can be slow to respond, resulting in the odd double prod to access your desired function. But the Cactus’ touchscreen sticks proud of the dash, meaning I can rest my hand on the top and operate the controls with my thumb. 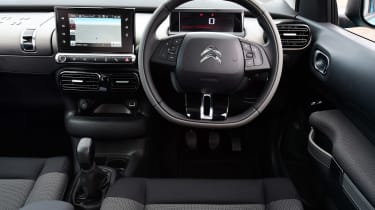 There’s an intelligent use of the interior space, with a shelf to place a mobile phone, a large glovebox and big pockets in all four doors. But it seems odd that there’s only one cup-holder in the front and the centre armrest storage isn’t particularly large. Still, it’s better than examples fitted with the ETG automated manual gearbox, which get a full-width front bench and no cubby at all.

The only other gripe so far is the lack of visibility thanks to the vast C-pillars at the rear. Even then, it’s only a problem when pulling out of a parking bay on the right side of the road, when it obscures traffic coming from behind and from the left.

So despite those unusual looks, Citroen has pulled off an impressive feat – making a loveable and radically styled car that’s also exceptionally easy to live with.

Quirky hatch is growing on us with its character and practicality 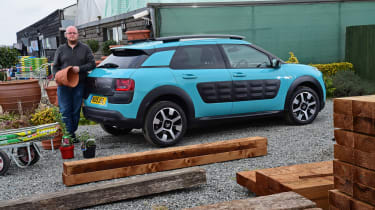 We often criticise cars for their anonymous styling, but that’s not something you can level at the Citroen C4 Cactus. Inside and out, the hatchback oozes personality and the brand’s new-found confidence. Citroen back to its quirky best? Quite possibly.

The biggest talking points are the Airbumps, which are dotted around the body. They’ve been described to me as Lego bricks and bumper-car deflectors among other things, but for me, they’re a tacit acknowledgement that this is a car that’ll spend most of its life around town – or in this case, garden centres. 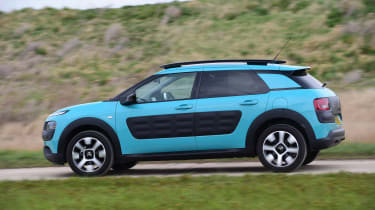 The ability to shrug off the attentions of shopping trolleys and carelessly swung car doors is important, so why not make a virtue of it?

There are Airbumps on all four corners, and tough-looking plastic cladding over the wheelarches and at the front and rear, and they give the car an air of SUV. In reality, though, it’s nothing of the sort.

The Cactus is suited to tarmac, although its pliant suspension means that it doesn’t really matter whether the road surface is rough or smooth – very little breaks the calm ambience in the cabin. That’s got a lot to do with the car being aimed at a very specific buyer: one who’s more interested in smooth and quiet operation than how quickly it can conquer a series of bends. 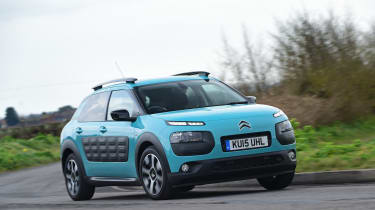 The 9.3-second sprint time from 0-62mph isn’t exactly blistering, but the 1.2-litre engine is keen to rev and far quieter than some other three-cylinders out there. I’ve not come close to the claimed economy figure of 60.1mpg, but nearly 50mpg isn’t bad for an engine that’s yet to be run in.

Less impressive is the manual box. I’m not concerned that it’s only got five gears instead of the more usual six; in fact, given that the Cactus spends most of its life around town, I rather like it. My main gripe is that the shift lacks the precision you’d find in the Nissan Juke or Skoda Yeti. There’s a lot of play in the change, and it feels like there’s a long throw between the gears. 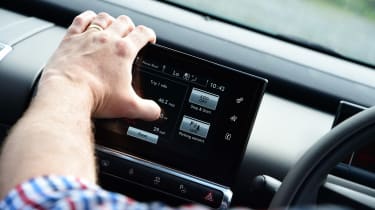 The interior, however, is a spacious delight. Almost all of the controls are operated through a touchscreen, and a second screen provides a digital speedo and other driving-related readouts.

It’s a masterclass in how to remove unnecessary clutter. By moving the passenger airbag to the roof, a huge glovebox has been made available. This is a rarity in a French car, as a fuse box often eats into available space. 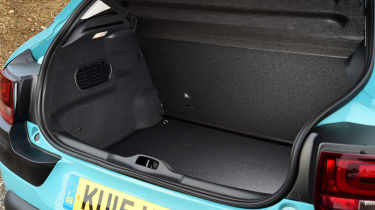 At £17,290, this PureTech 110 Flair is at the higher end of the C4 Cactus price range, although the addition of a panoramic glass roof, automatic parking and a system which automatically calls the emergency services in a crash have boosted the price here to £18,615. One less glamorous extra is a space-saver spare wheel in place of the standard-fit tyre foam. For someone who’s had lots of misfortune with these, it’s £75 well spent.

Even though it’s not been on sale for very long, I’ve spotted enough on the road to see that the Cactus is already a hit with the Citroen faithful. Plus, my first month with the car tells me its appeal might be far wider than that.