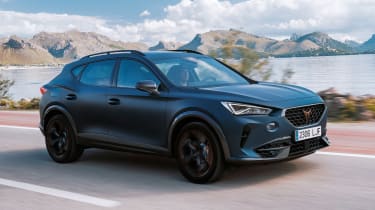 There’s an awful lot to like about the Cupra Formentor. As a bespoke performance SUV it looks fantastic, and it will delight most owners with the way it drives – it’s fast, fun and secure – while offering a decent dose of practicality, too. The interior looks just as good, but the over-reliance on the touchscreen and some iffy plastics take the shine off a premium-priced experience.

This car is the clearest indication yet that Cupra could be set to overshadow (or maybe one day replace) its SEAT parent. The Formentor is the first bespoke Cupra model, which will be followed by the El Born electric car that Cupra has nabbed for itself from SEAT.

Volkswagen Group politics aside, we’ve had our first taste of the Formentor and it bodes well for the new standalone brand. With 306bhp from its turbocharged four-cylinder engine, four-wheel drive and a sub-five second 0-62mph time, it’s more Audi S3 (with which it shares much) than Golf GTI.

That also applies to the price – further proof that Cupra is an upmarket brand. The Formentor starts at a shade under £40,000, but that does buy you a a low-slung SUV that’s as good looking as it is practical, and unlike anything else from the Volkswagen Group.

Our first drive was limited to a track, but in changeable weather conditions – ideal for the four-wheel drive system to show off its stuff.

A prod of the start button on the steering wheel fires the engine into life with a gentle burble. On the opposite side of the wheel is a Cupra button, which we’re encouraged to hold in to activate the sportiest Cupra mode, bypassing Normal, Sport and Individual options. 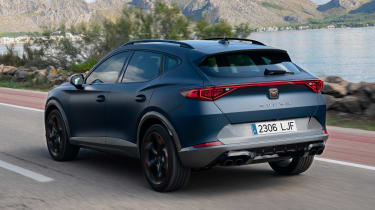 Instantly the engine note drops a couple of octaves, feels a little more uneven and a whole lot more exciting. This isn’t noise through the speakers, either – there’s a clever actuator in the bulkhead, as well as noise in the old-fashioned way through the exhaust itself.

As you’d expect, Cupra mode sharpens the throttle response and steering, and tweaks the 10.2-inch digital display. We tap the gear selector switch (yes, a switch) and head out onto the track where our initial feeling is that everything feels, well, weighty.

As is usual from the VW group, sportier modes only seem to add heft to the steering and the Formentor is no different. It’s direct enough, allowing you to place it with the confidence of knowing that the four-wheel drive system will keep you safe in wet conditions, but it lacks any real feel. You end up gripping the rather lovely wheel hard rather than feed in your instructions with a little more dexterity.

That doesn’t stop the Formentor being fun, though – the huge reserves of grip from the 19-inch alloys and sticky rubber inspire huge confidence, while – for an SUV – the car stays fairly flat through corners, allowing the tyres to keep on gripping for longer.

We’ll reserve our comments on ride quality until we’ve driven the car in the UK, but there’s no doubt that it’s firm – at a steady speed on the track’s main straight you could feel the car fidgeting a bit. Let’s hope that doesn’t make it uncomfortable on our roads. 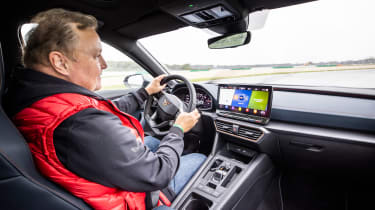 There’s no doubt that you’ll enjoy the power, though. The Formentor’s 306bhp may not quite up at AMG levels, but it’ll still pin you back into your high-backed seat and encourage you to keep pushing to hear that engine note get angrier and angrier. Lift off and you’ll find that Cupra has eschewed pops and bangs for more gentle grumbles – a bit more restrained, but still quite fun.

The impression of solidity is impressive, but there’s no lightness to the way the Formentor does its work. It’s well behaved; gripping and gripping, then gripping some more. It’ll respond faithfully to your inputs, feels safe and secure, but is unlikely to thrill the track day faithful.

However, with its SUV shape, the Formentor will do things hot hatches won’t. There’s plenty of space in the back – although the chunky front seats mean you have to peer around them to see forwards – and a decent 420-litre boot.

The design is classy – inside and out – and not as brash as some rivals. The copper accents on the exterior are replicated in the stitching on the leather seats and leather-like dashboard topper.

It’s a stylish, minimalist look across the dash with an absence of physical buttons, instead relying on the imposing 12-inch touchscreen. However, like the rest of the latest VW family using the same system, it’s not intuitive enough, needing too many prods of the screen to complete even basic functions – a case of technology for technology’s sake.

There is plenty of useful tech on board, though – mostly advanced safety features such as LED lighting, autonomous parking, adaptive cruise control and the like. However, much as the initial look of the cabin and the tech staring at you feels upmarket, the quality of the plastics at glove box level and below is more SEAT than Cupra. You can understand, if not forgive, that sort of quality when your range starts at under £20,000, but the cheapest Cupra is £35,000 and the Formentor is a £40k car, minimum.