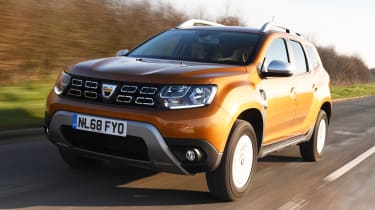 The Dacia Duster isn’t the most refined compact SUV you can buy, nor is it the most fun to drive. Other models are more practical, plusher and get better technology, too. However, for pure value for money, nothing else comes close to the Dacia. The frugal new diesel unit is a great match, too, and until the new turbocharged petrol engines arrive in the spring, it’s our pick of the range.

Since the second-generation Dacia Duster hit UK roads back in June, engine choice has been limited to one naturally-aspirated 1.6-litre petrol motor.

By March there will be a couple of more sophisticated motors to pick from: two variants of a 1.3-litre unit found in the Nissan Qashqai and Mercedes A-Class. But, in the meantime, a new diesel has doubled the under-bonnet options for Duster buyers. So does this add to the appeal of this cheap and cheerful SUV?

The 1.5-litre dCi is carried over from the old Duster, but has been updated for 2019. Like the upcoming 1.3, it’s found in a range of Nissan, Renault and Mercedes models. 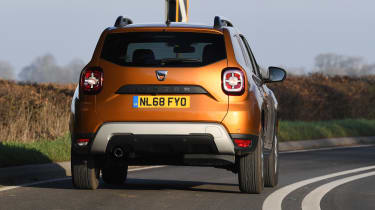 As elsewhere, the revised engine benefits from a modest 5bhp hike over the old Duster’s diesel, and a useful torque increase thanks to an overboost function. An AdBlue system helps cut emissions, too.

On the road you’ll notice there’s not much in the way of soundproofing. As a result, and as before, it’s fairly audible on start-up and under hard acceleration. But this isn’t a deal-breaker because, for the most part, it’s among the smoothest small diesels on sale.

Although performance is steady rather than thrilling (0-62mph takes 11.8 seconds), the power delivery is linear and there’s a decent shove of torque throughout the rev range. It’s certainly livelier than the breathless 1.6 petrol which, without a turbo, needs to be worked pretty hard to extract any kind of performance. The petrol has a five-speed manual, while the diesel comes with a notchy six-speed transmission. 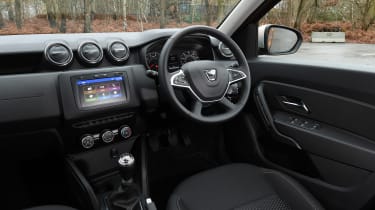 The new Duster sits on the same platform as the previous model: a stretched version of the Nissan Juke’s underpinnings. But pronounced body roll and lifeless steering mean it’s not the sharpest compact SUV on the market. That numb set-up is suitably light, however, making the Dacia feel easy to drive and manoeuvre at low speeds.

You’d expect a car with this much ground clearance and high-profile tyres to be really comfy. It’s a bit wobbly around town, but pick up speed and the ride settles down. With that long sixth gear, it’s surprisingly accomplished on the motorway.

It’s pretty frugal, too. Dacia claims 64mpg, and this example, which we will be running on our fleet over the next six months, has so far averaged 51mpg in mixed driving. Not a bad return for such a bulky car.

For £2,000 more you can add four-wheel drive which, in our experience, makes the Duster one of the most capable small off-roaders on sale. If you’re looking for a cheap, go-anywhere 4x4, little comes close, while its superior road manners saw it beat the new Suzuki Jimny in our road test earlier this month. 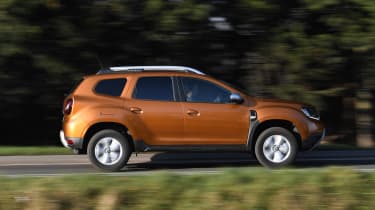 Comfort is the third highest of four specs, and is likely to be the most popular. Spare the decadence – by Dacia standards – of this model’s alloys, seven-inch touchscreen sat-nav, Apple CarPlay and Android Auto, reversing camera and cruise control, and you can get a basic Duster Access for just £9,995; a whole lot of car for something that costs barely £100 more than an entry-level Volkswagen up!. Top Prestige spec adds premium features such as ‘diamond cut’ alloys, climate control and keyless entry.

All Duster models vastly undercut cars of a similar size. Take the Qashqai as an example: match the two in terms of equipment and a Qashqai Acenta Premium with the same diesel engine costs an eye-watering £24,495 – that’s £9,100 more than you’ll pay for the Dacia you see in these pictures.

It makes monthly budgets very tempting. A Duster dCi 4x2 Comfort costs £190 per month on one of Dacia’s four-year PCP finance deals, while even with Nissan’s current zero per cent APR offers, an equivalent Qashqai will set you back £300 a month. That’s a big jump in annual running costs, whichever way you look at it.